Jack McGrath reflects on a job well done with the Lions 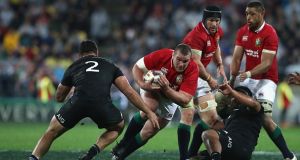 Jack McGrath featured in all three Lions Tests against the All Blacks. Photograph: David Rogers/Getty

There is uniformity to how most players appraise a Lions tour, alighting on new friendships and strong bonds, and the latest iteration seems to have provoked a traditional response from the constituents.

Jack McGrath’s reflections on the summer from a rugby perspective centred on the drawn test series in New Zealand. The Leinster and Ireland loosehead prop disputed the number one jersey with English duo Mako Vunipola and Joe Marler and although he lost out on the starting place to Vunipola, he played a part in the three tests.

So did he enjoy his impact role? “It is different. I’d have been disappointed if I wasn’t involved at all in any of the three tests. It’s a team sport. It was a role I had to fulfil and I was happy to do it. I felt I wasn’t a million miles away but it is down to the coaches. Overall I was happy, involved in seven of 10 games, which was pretty cool.”

One of those was the third and final test which concluded in a draw, so coming in cold must have been a tough mental and physical challenge, when his remit included two pivotal scrums. He explained: “I thought the one before that was going to be the last scrum. Whatever happened, it flicked out, Rhys Webb got it and went up the field and there was a knock-on somewhere along the line.

“You just have to back your drill, what you have done hundreds and even thousands of time before in training and games, Leinster and international. It was more so back the drill, don’t do anything different. I haven’t really seen that last game back but it could have been a good scrum or bad scrum I can’t really remember; (but they were) the two biggest scrums of my career.”

He agreed that he came back a better player, something he’ll look to reinforce with club and country this upcoming season. “For me dealing with the guys like Mako (Vunipola) and Joe (Marler), directly in my position, I have learned a lot.

“The coaches as well, Graham Rowntree and Steve Borthwick, you find these little gems and work on them. Finding out how they tick is pretty interesting, finding out their thought process. You can see them from afar, admire players but when one-on-one with them you can pick their brains.”

He enjoyed four weeks off on his return albeit with a weather eye on his physical conditioning. “I can’t stop training otherwise I would balloon,” he laughs.

“You take two weeks off and then as the fear creeps in after that you have to get on your bike and start working again.”

In his second week of pre-season he won’t be available for selection until probably round five or six in the Guinness Pro14 and at that point he’ll be impatient for some game time.