Rugby Championship likely to be another All Blacks procession 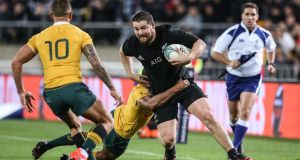 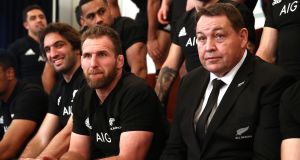 Sam Whitelock, Kieran Read and Steve Hansen of the All Blacks pose for the official team photograph ahead of the Rugby Championship. Photograph: Phil Walter/Getty Images

The All Blacks juggernaut hit a road bump in the British and Irish Lions series but it should be business as usual for the world champions when they take on South Africa, Australia and Argentina in the Rugby Championship.

New Zealand reduced their rivals to roadkill when they took the title last year, winning all six matches with try-scoring bonus points and bookending their campaign with crushing wins in Australia (42-8) and South Africa (57-15).

The sustained pressure the Lions were able to put the All Blacks under in their drawn series in June and July would normally offer hope to the Wallabies and Springboks were not both proud rugby nations at such a low ebb.

Argentina look even less likely to beat the All Blacks for the first time and it is against the other two nations they will be targeting the two wins they want in their sixth crack at the southern hemisphere championship.

The Pumas take their quest initially to Port Elizabeth to face South Africa on Saturday after New Zealand and Australia have opened the tournament in Sydney, the first of three Bledisloe Cup Tests this season.

The Wallabies once again have the unenviable task of taking on the All Blacks in back-to-back Tests at the start of their campaign and only the most optimistic of Australians are expecting a first win in six matches against their neighbours.

A wretched Super Rugby campaign in which none of the five Australian teams managed a single victory over New Zealand opposition in 26 attempts sandwiched a disappointing June Test window when the Wallabies were humbled at home by Scotland.

Michael Cheika remains confident the rebuilding process he embarked upon after reaching the final of the 2015 World Cup is on course and that his team have a genuine chance of taking possession of the Bledisloe Cup for the first time since 2003.

Australia have won just eight of their 18 Tests since the World Cup final, however, and coach Cheika was not exactly spoiled for choice when he named flanker Michael Hooper his new captain last month. Hooker Stephen Moore is retiring from international rugby at the end of the year.

All Blacks coach Steve Hansen has, by contrast, been able to maintain New Zealand’s extraordinary winning rate despite rebuilding his team in the wake of the departure of a handful of greats after the successful defence of the Webb Ellis Cup.

Beauden Barrett will lead the line from outhalf, Kieran Read captains the side from the back of the scrum and a third World Rugby Player of the Year, lock Brodie Retallick, completes an impressive spine.

Dane Coles has the talent to join that trio in claiming rugby’s highest individual prize and the hooker should play some part in the championship but he will miss the opener because of a head knock.

South Africa restored some pride to the Springboks shirt in June with a 3-0 series victory over France in the summer and some of their players have at least enjoyed some success at provincial level after the Lions reached a second consecutive Super Rugby final.

The exciting Lions outfit now provides the spine of Allister Coetzee’s national team even if the inspirational captain of both sides, Warren Whiteley, will miss the Rugby Championship because of a groin injury. Eben Etzebeth will take over in his absence.

Coetzee still has to convince many that he is the right man to lead South Africa to the next World Cup and will be looking to harness the spirit Johan Ackermann built with the Lions in Johannesburg.

While South Africa are languishing fifth in the world rankings, Argentina are a lowly ninth after two home defeats to a second string England side in June.

Daniel Hourcade’s side are in danger of plateauing after taking a single win in each of his first three seasons in charge and have yet to reap the expected dividend of having most of the squad playing for the Jaguares in Super Rugby.

It is now 10 years since Argentina’s breakthrough third place at the World Cup and, with the future alignment of southern hemisphere rugby by no means certain, the Pumas could do with making a statement or two in this Rugby Championship.

* Titles include Tri-Nations, which ran from 1996-2011 before the addition of Argentina.