Kieran Keane believes Connacht ‘can do anything’ 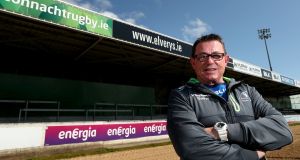 A self-confessed dreamer and innovator, new Connacht rugby coach Kieran Keane believes his new club “can do anything”.

“This organisation, the players, and myself, we all want to be the best we can be, and want to move forward. I am a terribly competitive human at the best of times. We can do anything,” he says of Connacht at the start of his three-year reign.

The former attack coach with the Chiefs in New Zealand says it is all about reaching potential.

Keane says Connacht fans can expect to see some of the attacking flair which became associated with the Waikato side in their climb to this season’s Super semi-finals.

“That was my job at the Chiefs, to invoke the change there, and we had a lot of success with that. There will be a flavour of that.”

However, the wily 63-year-old says expansive rugby will also be balanced. “You have to play to your strengths and hide your weaknesses – it’s the way you have to do it.”

Having lost the two-horse race with Taranaki’s Colin Cooper to take over from Glasgow’s Dave Rennie at the Chiefs, Keane took up Connacht’s offer to replace Pat Lam in his dream to return to a head coach role – his first since guiding Tasman from the second division of provincial rugby to the final in the top flight.

It was also enabled him to come to Ireland – his great-great-grandparents having hailed from Waterford – and he “felt the love” on his first visit.

“In the past I have been coaching battlers and teams that were probably not the rock stars, and I had a lot of success. And these guys mirror that a lot. I’m one of a few who have done it that way anyway. My jobs at Tasman – it’s a very similar population, same economically, same budget – in fact it’s a little less in relation to the big boys – so it fits well with me.

“There is aspiration [here] and that is wonderful. I am aligned with that. I always want people to be the best they can. I have a lot of admiration for young people and players, they have kept me young. So this just fitted me, and the fact that it is in Ireland was a blessing as well.”

The new coach has spent a week with his new charges, and has already identified lock Ultan Dillane as an “impressive man” whose approach to the game is “music to my ears”.

New recruit from Australia, Jarrad Butler, is a “unique individual who can cover 6, 7 and 8”.

“I have a couple of thoughts where he might shine; he’s skilful, an intelligent young man and natural leader, so I’m really happy about him.”

Also back training are Tiernan O’Halloran after a knee operation, and Bundee Aki, who could be ready for the second Pro 14 fixture.

“He’s progressing really well. In fact we have a bridle on him, trying to hold him back, so, yeah, he’s champing at the bit and looking pretty good.”

John Muldoon will continue to captain the side – an “absolutely easy” decision, says Keane.

From a fanatical rugby country, it is no surprise that Keane, aka KK, is known as the “mad professor”, and for that he makes no apology.

“Innovation has always been part of my creed about playing the game, and sometimes when listening to me you can get lost because I’m away with the fairies on it.

“I love the game passionately. I love the whole thing about rugby, it’s a big part of my life. So dreaming about it when I am awake and asleep and trying to innovate, that is part of KK, that is what he is about.”