Launchbury and Joseph set to miss out on Lions squad 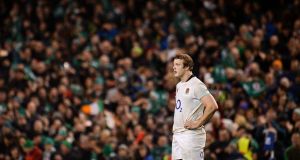 England’s Joe Launchbury is expected to be overlooked by Warren Gatland for selection in his Lions squad. Photograph: Sam Barnes/Sportsfile via Getty Images

Warren Gatland is expected to overlook a number of England’s Six Nations champions when he names his British & Irish Lions squad on Wednesday, with the secondrow Joe Launchbury among those to miss out.

Launchbury excelled for England throughout the tournament but is up against Alun Wyn Jones, who captained the Lions in the final Test in 2013, Maro Itoje, Courtney Lawes, the Ireland pair of Iain Henderson and Donnacha Ryan, as well as the fit-again George Kruis, for one of what is expected to be five secondrow positions.

Kruis returned for Saracens against Northampton on Sunday to make his first appearance since having knee surgery in January and lasted 80 minutes in front of the watching Steve Borthwick, one of the Lions assistant coaches. Considering he was singled out by Gatland as being still in his thoughts despite missing the Six Nations, Kruis’s timely return may prove Launchbury’s undoing.

Jonathan Joseph is also likely to be a shock omission from Gatland’s squad, while George Ford’s recent struggles for Bath – Rob Howley was in attendance during their defeat by Worcester last weekend – means his stock has fallen and he may instead feature on England’s summer tour to Argentina.

Gatland is still likely to pick several Englishmen but it appears Eddie Jones’s side’s defeat by Ireland on the final weekend of the Six Nations will count against a handful of hopefuls. “I want the English players to front up. And if they do come through it all, yes, that is good for the Lions,” said Gatland, before the start of the Six Nations.

Despite Northampton’s defeat the England captain, Dylan Hartley, was another to advance his claims in front of Borthwick and it is believed his name will be a source of debate at the selection meeting on Tuesday.