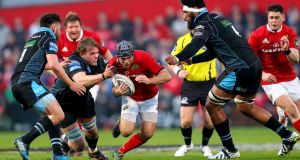 Director of rugby Rassie Erasmus exudes an implacable calm which, if replicated by his players, would suggest Munster are in a good place mentally ahead of Saturday’s Champions Cup semi-final against Saracens at the Aviva Stadium.

There is no bemoaning fate, fickle or otherwise, which is viewed as emotion wasted in pursuit of the uncontrollable. Erasmus’s disposition doesn’t flicker as he sifts through the casualties, offering a prognosis on whether they will be present or not at the weekend.

Duncan Williams, who pulled out of Munster’s victory over Ulster on the Friday, the day before the game, could have played despite his groin issue but with Conor Murray’s continued shoulder issue and likely absence, a prudent approach significantly outweighed any inclination to play him.

While Murray’s obvious ability casts a long shadow, Williams has been a very capable deputy, responsibility sitting more easily on his shoulders than perhaps at any time in his career.

Erasmus, who works with him on a daily basis, was asked what Williams brought to the team dynamic. He replied by posing a few rhetorical observations.

“Well, he’s 32-years-old, [so] experience. How many games has he played for us, just this season? How many try-saving tackles has he made?

“I think, for me, he is one of the unsung heroes. I’ve said it a few times, I know there are people who differ, but I see him sitting doing video sessions and his contribution, on and off the field and his knowledge of the game is really top notch. He’ll put up a good show and I have full confidence in him.

“The thing that Duncan brings to the table is sometimes the non-flashy stuff, which really gels a team together.”

Erasmus eschewed the notion of a direct comparison, style-wise between Williams and his Saracens counterpart, Richard Wigglesworth.

“Wigglesworth has certainly got a great box kick, tremendous pass, he snipes around the ruck, he puts the guys into roles whereas Duncan plays a totally different game, a more physical game, sometimes he mixes it up with the forwards.

“We’ll have to combat Wigglesworth in other ways; it shouldn’t be only Duncan’s problem. If you go right through that Saracens team, there are so many threats.”

A key factor for Munster at the weekend will be to find the right emotional pitch, guaranteeing the requisite intensity without becoming overly fixated to the detriment of their composure with and without the ball.

“I guess that’s the challenge, to stay on task and things that worked for us, keep on doing them. We have to focus on them, if we don’t stop the things they are doing well, we’ll lose the game.

“One of the things they do well is the intensity they put on to whatever you’re trying to do. I must say, when I look at Saracens, apart from their tactical and individual brilliance, every game they’ve got higher intensity than the opposition.

“I guess that’s because they’ve got a squad that’s been building over years and the can rotate and lose players and the next guy will step in. That will probably be the biggest thing. I wouldn’t worry about our guys being overly motivated because you’re going to need that to match Saracens.”

Erasmus is a fan of the way the English club play the game, especially a rugby league style attack.

“They do it perfectly, probably the best, especially off third or fourth phase, when it looks unstructured and they seem to find structure in chaos.

“We must try and find defensive structure when they’re doing those things. Of course, if you try to figure out what mini-move they’re doing, they have so many different options and they always seem to pick the right one.

“Those will be the kind of things we will try to contain and then, most importantly, when we have the ball we must execute as well.

“I think they started out as a team who suffocated and strangled teams out of life, hope and belief during matches. Now they’ve developed into a team that does that but when they’re on attack they have these almost rugby-league mini moves which seem to come off, then matching that with a great kicking game and great finishers.

“They are one of the most complete teams, I’m talking Southern Hemisphere with Super Rugby, the Crusaders, those kinds of teams, the Brumbies at their best. They are right up there and I think the way they’ve contracted and balanced their squad with foreign players and building momentum, squad size, that’s the team everybody aspires to be like at this stage.”

It all leaves Munster with plenty to do ahead of the weekend.

On the speculation linking him with a return to South Africa to coach the Springboks at some point, speaking to TV3 Erasmus said: "There is really nothing happening on that front. I'm signed here with Munster.