Lions selections are almost as hard as the matches

Spare a thought for the backroom staff and coaches, whipping tired players into shape 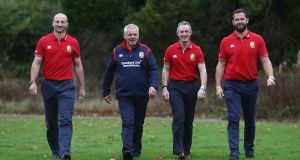 Suffice it to say the process of Lions selection has changed over the years. The first tour in 1888 was dreamt up by three cricketers and was on the whole comprised of players from northern England looking to make a few quid. One of them, Jack Clowes, was even banned from playing any of the matches by the RFU for accepting a generous £15 kit allowance on the eve of the tour – he spent eight months away without officially playing a game.

Even after the dawn of professionalism however, things were not quite so stage-managed as today. On Wednesday those players selected can find out by turning on their TVs and watching the tour manager, John Spencer, reading out Warren Gatland’s chosen few.

Only the captain has already been given the official nod by Gatland, but it was not always this way, as Simon Shaw, a three-time tourist in 1997, 2005 and 2009, explains. “Before the 1997 tour I got called to sit at the same table at the Rugby Writers’ dinner with Fran Cotton,” says Shaw. “Midway through dinner he whispered in my ear – it sounds a bit creepy doesn’t it – he basically said if I can carry on in the same mode post-Six Nations and stay injury free then in all likelihood I’d be on the plane.”

In those days it was made official with a letter through the post – Austin Healey famously hid his flatmate Will Greenwood’s in 1997 – and while different players will adopt varying approaches on Wednesday – some will be at training, others on holiday and one or two perhaps even hiding under the covers – it is the coaches who have agonised over the past weeks and months. Phil Larder served as assistant to both Graham Henry in 2001 and Clive Woodward four years later, having been England’s defence coach between 1997 and 2006.

“The difficulty always is trying to be 100 per cent honest and fair with your Lions hat on,” he says. “I knew the England players inside out and one of the problems that [fellow assistant] Andy Robinson and myself had in 2001 was that if we had picked our strongest team it would have had 12 English players in it. Even after the tour we felt that if England had been out there instead of the Lions we would have won the series. If you look at the Lions, you’ve only got two or three matches before the Tests start in which to blend a team. It’s a hell of a difficult job.”

According to Larder, Henry, who publicly picked a long list in February 2001, was a coach of his own mind. “He talked about producing the best rugby union team ever,” says Larder. “He was looking for the people with the ability to win good, fast, set-piece ball and then we were blessed with world-class attackers.” Henry’s long list did not include Jason Robinson, who was yet to start for England when named as part of the touring party. So did Henry need convincing? “Not at all,” says Larder. “Jason was a bit special.”

Woodward, meanwhile, has been roundly criticised for turning to his 2003 World Cup winners and for picking a bloated squad that was split into two teams with a clear distinction between the midweek and Test sides. “Some of the players that Clive had known personally were three or four years older and some of them had declined,” says Larder.

“The World Cup-winning team was the oldest team in the competition. Some of the players were not quite as good as they had been. Some of the new players, he didn’t know them as well. Usually it’s the players that have been outstanding in the Six Nations that get into the squad and the Test team. The others on the periphery were down to Clive because he had seen all of it. I think Gatland is putting himself in a similar position.”

Gatland has the final say then, but it is worth bearing in mind a memorable clip of the official documentary from the 2013 tour in which Graham Rowntree implores the head coach to select Alex Corbisiero. The England loosehead was not part of the initial squad but injuries elsewhere dictated he went on to play a starring role in the first Lions series win for 14 years. Fulfilling that reserve role can be tricky, however, as Shaw, who was omitted from Woodward’s 2005 squad but seconded while on his way to play in Martin Johnson’s testimonial match, can testify.

“The problem with 2005 in particular was that there were in effect two very distinct teams,” says Shaw. “It would be a week before you saw half the squad. I also went straight into a game, got off the plane, trained a couple of times and played against the Maoris which didn’t help my cause.

“I knew about the Lions but I didn’t appreciate the enormity of it all in 1997. In a sense it all came a bit easily but missing out in 2001 was a huge blow, not actually being there when it was all going on but seeing all the footage, that really drives it home. It really, really hurts more than anything.”

If it sounds like an ordeal for the players, however, spare a thought for the backroom staff and fitness coaches, tasked with whipping a group of tired players at the end of a long season – many of whom they are unfamiliar with – into shape for a gruelling tour. “Warren really builds characters around him that he knows will get on with each other, whereas in 2005 Woody just brought the best,” says Craig White, the strength and conditioning coach in 2005 and 2009, when he was reunited with Gatland, having worked with the New Zealander at Wasps.

“And maybe they didn’t gel but Warren is really good at understanding if they are going to get on with one another.

“Looking at the forthcoming tour one of the things Warren does so well is that he chooses a management team who are real energisers, one of the strengths of Warren is that he looks for psychologists. They’ll know whether to give them time off, make them train harder, put an arm around them or let them let off some steam. A lot of them will be really good people managers.

“In 2009, if you asked me what the main difference was I would say without a doubt, people. They were more down to earth, more grounded, more laid back, with a real concern for the player at heart. That’s what Warren’s really good at doing, just not being so serious. There was a lot more fear around that tour than in 2009.

“Warren will probably pick the squad with a few surprises in it. But what he does very well is he picks players who might not be the best in the world at that current time but they’ll be very, very durable so he’ll end up with a lot of durable players. Warren is unique in the sense that he puts fitness first.”

So what are the words of wisdom from those who learned the lessons of 2005? “Personally I feel like they’ve got an almost impossible job,” says Larder. “I thought that I didn’t have enough time with the team before we played the first test to produce a defensive pattern and a defence I was satisfied with. It was just an impossibility, there just wasn’t enough time. We got slaughtered, didn’t we?” Over to you, Warren.