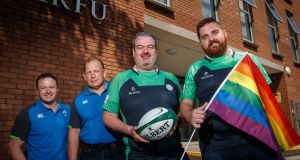 The IRFU has confirmed it will act as an official supporter of the 2019 Union Cup, a rugby tournament for the LGBTI community that will be hosted by the Emerald Warriors Rugby Club at Dublin City University in June of next year.

It is the biggest international gay rugby 15-a-side tournament in Europe. The announcement was made ahead of the Dublin Pride Festival this weekend, during which the union will fly the iconic rainbow flag from its headquarters. The Union Cup is a biennial European, amateur, inclusive rugby union tournament, bringing together up to 50 teams from across Europe.

The 2019 tournament was secured by the Emerald Warriors at the last staging in Madrid, over bids from Manchester and Cardiff. The Emerald Warriors have previous experience of hosting a high-profile event as they staged the Bingham Cup, billed as the Gay Rugby World Cup, in 2008, at Dublin City University. The tournament honours Mark Kendall Bingham, a 31-year-old American who died on September 11th, 2001, on board United Airlines flight 93. He is believed to have been among the passengers who stormed the cockpit to prevent the hijackers from fulfilling their goal of killing thousands of innocent people.

In a mobile phone call to his mother, Alice Hoagland, shortly before the plane went down Bingham told her that “some of us are going to try and do something”. He received various posthumous honours and singer Melissa Etheridge dedicated the song, Tuesday Morning, to his memory. The 6ft 4in, 16 stone Bingham played for the University of California, Berkeley rugby team, winning a string of national championships before going on to found his own public relations company, the Bingham Group.

In recognition of his selfless act, the International Gay Rugby Association and Board decided to inaugurate a biennial tournament in his name with the first staging appropriately at his home club, the San Francisco Fog, in 2002. The Union Cup is the European equivalent.

Damien Kavanagh, president of the Emerald Warriors and member of the organising committee of Union Cup 2019, said that the club would be fielding three teams and was hoping that another Irish club, the Ulster-based Azlans, would also take part.

“We are also looking at a women’s tournament and would be optimistic that we could attract enough teams. We are expecting 45-50 teams and between 1,500-2,000 people to take part. We are delighted to have the IRFU on board supporting us in hosting the Union Cup 2019. It is a strong indicator of Irish rugby’s commitment to being diverse and inclusive,” said Kavanagh.

“As participants in the Leinster league we have always felt welcomed and included by our Irish rugby family. The expertise and advice we will get from the IRFU will ensure that the core focus is on rugby of the highest standard and will add to the overall professionalism of the event. We can’t wait to welcome all the European IGR teams to Ireland and have them experience a traditional Irish welcome.”

The IRFU’s director of rugby development Scott Walker said: “Rugby prides itself on being an inclusive sport and we are delighted to assist the Emerald Warriors in hosting the Union Cup. We run a number of tournaments across the year so we hope to take away some of the complexity that comes with hosting a large tournament to allow the organising committee to concentrate on other matters, such as the warm welcome players always enjoy when they come to Ireland.

“We are committed to promoting the tournament throughout the coming season and we believe this is an opportunity for everyone in Irish rugby to celebrate diversity and inclusion and underline rugby’s commitment to a sport for all.”

Rapid Vienna take the gifts on offer as Dundalk mess up their lines again 22:28
Tipperary footballers revert to blue-and-gold for All-Ireland semi-final against Mayo 21:17
Nicolas Pepe stars as Arsenal seal Europa League qualification 20:36
Maradona’s terrible, terminal journey from human to myth divided him in two 20:36
Huge crowds pay tribute to Maradona in Buenos Aires and Napoli 20:09
Crossword Get access to over 6,000 interactive crosswords