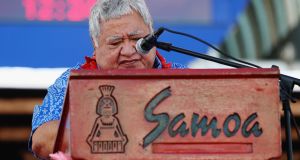 Samoa enter Saturday’s 2019 Rugby World Cup qualifier first leg against Germany in Apia on foot of a stinging rebuke from Samoan prime minister Tuilaepa Sailele Malielegaoi, who also happens to be president of the country’s rugby union. The winners over the two legs – the second is in Germany on Saturday, July 14th – will take their place in Ireland’s pool for the Rugby World Cup in Japan next year.

The Samoa Observer newspaper reported that in addressing parliament recently the prime minster upbraided the national team stating: “You have no guts.” Samoa has lost nine successive test matches since a 25-23 victory over Canada in November, 2016. He continued: “I told them to look at Tonga, their population is nowhere near 200,000 and yet they are playing cricket with you guys.

“This shows you have no guts. You played 10 (sic) games and you lost in all of those ten games, so what does that tell me, ‘you have no guts.’ That is what I said to them on Wednesday night. I said, if you don’t win this game then you all have to resign from the team. I told them that it would be better to let the kids playing in the Super 9 to represent the Manu Samoa if they can’t handle it.”

Despite the initial criticism, he had calmed down a little later in the week when addressing the issue once again in a media programme later that week. He has no doubt that Samoa will prevail over the two legs and once they qualify for the World Cup expects them to reach the quarter-finals as “we have a good pool.” “Everything happens for a reason, and with this game with Germany the Manu Samoa will come back strong in this game. The reason being is because we have reached the very bottom and there is nowhere else for us to go except coming back up.”

They will be playing against the team (Germany) that has no knowledge whatsoever on how to play rugby, so we must win this game. And the other good thing about is that when we win against Germany and make it through the World Cup, we will be in a good pool. So I would be very shocked if we don’t make it to the quarter-final.”

The loser between Samoa and Germany over the two legs will go into the Repechage with the country that emerges from that qualifying for Japan and a place in Pool B alongside the defending champions, New Zealand.