Felipe Contepomi to be named as new Leinster backs coach 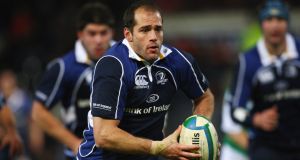 Felipe Contepomi in action for Leinster during a Heineken Cup match against Toulouse at the Stade Ernest Wallon on November 2007. Photograph: Michael Steele/Getty Images

Felipe Contepomi appears set to return to Leinster as backs coach replacing Girvan Dempsey, who agreed to join Aviva Premiership club Bath in the summer in the same capacity as the role he had for the Irish province.

The story broke in Argentina on Sunday afternoon and has been reported by a number of sources.

Contepomi, who made 116 appearances for Leinster from 2003 to 2009, was a hugely popular player at the club, including helping them to a first Heineken Cup success in 2009. He was injured in the semi-final victory over Munster, damaging a knee – Jonathan Sexton replaced him in that match – and the Argentine outhalf missed the final win over the Leicester Tigers.

During his time at Leinster he studied in the Royal College of Surgeons and worked in Beaumont Hospital. He left Leinster in 2009 to join Toulon before going on to play for Stade Francais. Contepomi won 87 caps during a 15-year career with Argentina before retiring in 2013.

He worked in his father’s medical practice in Buenos Aires while also cutting his teeth as an assistant, coaching with the Super Rugby franchise, the Jaguares. He would join Leo Cullen, Stuart Lancaster and John Fogarty in a coaching capacity with the European and Pro14 champions.