‘We knew how good it would be to come back from 1-0 down. That was kind of driving us’ 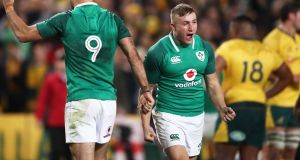 Jordan Larmour can now take four weeks’ holidays and, perhaps more than most, take a breath and reflect on what this rookie season has brought. And right to the end it kept on giving, a 22-minute run-out at full-back augmenting previous stints on this tour of 65 and 55 minutes, taking in both wing and outside centre. Utterly unfazed he was by it all too.

“I was delighted to get another opportunity in a green jersey, and it has been a pretty special season for me, it has been a dream season, I couldn’t have asked for any more.

“We talked right through the week about making a bit more history. We knew how good it would be to come back from 1-0 down to win 2-1. That was kind of driving us on. We are delighted, we dug a win out. We didn’t want a loss hanging over us for our summer holidays. So we could not have asked for any more.”

It was in the fall-out from that first test defeat in Brisbane that, three days later, Andy Farrell declared: “Well, we’ll see what we’re made of. I mean, this is what top level rugby’s all about. We’ll see what the good old-fashioned Irish ticker is about, won’t we? Because it’s the game that matters for us to stay alive.”

Rather than a critique of the first test performance, which was hardly lacking in physicality, it was more Farrell throwing down something of a gauntlet to the Irish players. But it made a big impression on a 21-year-old on his first tour.

“That was a turning point in the tour. Rugby is about the collisions, and if that is being questioned it is a bit of an insult, I suppose. Everyone takes it to heart, everyone wants to put that right, so when Andy said that it gave us a kick up the ass. We know we have to step up and we have to produce. We spoke about it during the week. I think in that game there we showed in the last 10 minutes, when they were coming at us, all the boys dug deep.

“The whole season has been a bit of a whirlwind, it has been a dream season. At the start of the season I had hopes of starting with Leinster A. I got a few opportunities here and there, and tried to take it with both hands, so hopefully next year we can back it up again.”

Larmour talked about learning off experienced players such as Keith Earls and Rob Kearney.

“I see Johnny, Keith Earls, Rob Kearney, all these guys have been a massive help to me. I watch their games and see if I can add anything to mine. It is a really good environment to be involved in, everyone wants to get better, everyone is hungry to learn.”

And Larmour said of Johnny Sexton: “He is an incredible player. He is probably one of the best in the world, so I am so lucky to get to work with him every day, and learn from him, just little things in meetings that he sees that no one else sees.

“On the pitch today, little details, minute details, once you get those right they change the game, so it is unbelievable to have him, in Leinster and Ireland he is just an incredible player, and we are just so lucky to have him. He is just a great player and it is great to play alongside him.”

Asked to describe Sexton as a leadership figure, CJ Stander said: “Johnny is very, very emotional. He’s got a good mix between being emotional and taking charge of the game. That’s what makes him a great leader, he’s someone who expects everyone to give their best every time.

“The thing about him, especially in this group, he doesn’t understand when someone doesn’t give 100 per cent, that’s great. He takes it from the front, every time. It’s great to come up from a scrum and see your number 10 is making a big hit or he is in the poach position to win the ball. Then he gets up and kicks the three points. He brings a calmness as well.”

Speaking from bitter experience, not least the series defeat in South Africa two years ago, Stander added: “We knew we had to dig deep to get the series win. It’s a great feeling. I have learned in the last couple of years that if you get four or five weeks off and you’ve lost the last game, that’s the one that sticks with you. It’s great to go into the break with good news.”