Contepomi to be warmly welcomed back into Leinster fold 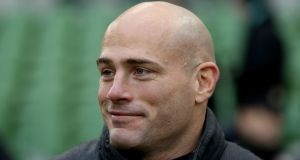 Felipe Contepomi: “I spent much of my playing career at Leinster and now I’ll be back in Dublin to join a great staff and to work with great players.” Photo: Inpho

The confirmation that Felipe Contepomi will return to Leinster as backs coach having graced the jersey as a player from 2003-2009 will be widely welcomed by players, coaches and supporters alike.

But one person who will be looking forward especially to the Argentine doctor’s return is Johnny Sexton.

The Lions and Ireland outhalf made his Leinster debut in January, 2006 when coming on as a replacement for Contepomi against the Border Reivers in Donnybrook and in December of the same year Sexton made his first start for the province against Munster before being replaced by Contepomi after 68 minutes of a 25-11 defeat in Limerick.

They two occasionally played together with Contepomi very much a mentor to his young protégé. Although the Argentine outhalf suffered a serious knee injury in what would be his final game for Leinster, the 2009 Heineken Cup semi-final victory over Munster and was replaced by Sexton, there was no one more effusive in his praise post-match of his understudy’s performance that day at Croke Park.

In occasional interviews since leaving Leinster, Contepomi has championed Sexton’s pre-eminence as one of the top number 10s in world rugby. The two shared that competitive gene where winning was everything and were demonstratively passionate in presence and attitude on a pitch.

Leinster head coach Leo Cullen explained: “Johnny and Felipe have a very strong relationship going back to when they were competing with each other and they played a little bit together as well. Johnny is very, very excited about Felipe coming back as well.”

Contepomi’s swashbuckling style as a player provided Leinster with another dimension and arguably his finest performance – there were so many from which to choose – was a Heineken Cup quarter-final victory in Toulouse (2006). Many will hope that he retains that outlook as a coach.

Cullen explained that Leinster had considered several candidates during the process but that his former team-mate was the right person.

“He was a great character in the dressing room and he still speaks incredibly passionately about Leinster, wants to do well and add value as best he possibly can.

“A lot of guys come through the system here, through the clubs and schools into the sub-academy and academy and you are producing from within so much. Every now and again it is nice to have an outside perspective.”

Having played in England, Ireland, France as well as winning 87 caps the Pumas and cutting his coaching teeth with an Argentina XV and the Super Rugby franchise, the Jaguars, Contepomi understands diverse cultures and styles.

Cullen continued: “We spoke to a number of candidates behind the scenes. Felipe is just so passionate about Leinster still even though it was 2009 since he was here last. He has played a multitude of positions in different environments so has that experience.

“He is going to add to the coaching group in terms of his personality. Everyone has been working incredibly hard over the last number of years culminating in the two trophies at the end of the season. It is good to have a fresh face coming in, someone who will give us a slightly different perspective on things.”

Contepomi said: “I spent much of my playing career at Leinster and now I’ll be back in Dublin to join a great staff and to work with great players. All this is a huge motivation and it will be a great experience to continue growing as a coach.”