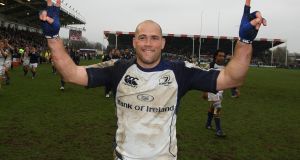 Leinster have confirmed the appointment of Felipe Contepomi as the province’s new backs coach - subject to the former outhalf being granted a work permit.

Contepomi made 116 appearances for Leinster after joining in 2003, and helped the province to their maiden Heineken Cup title in in 2009.

40-year-old Contepomi - who also won 87 caps for Argentina - will replace the outgoing Girvan Dempsey, who has agreed to join English Premiership side Bath.

He will join Stuart Lancaster, John Fogarty and Leo Cullen on the European champions’ coaching ticket.

On Contempomi’s appointment, Cullen said: “We’ve been working very hard behind the scenes to recruit someone we think can build on the work done over the last few seasons, and who can ultimately add to the systems and the processes we already have in place.

“To be able to call on someone of Felipe’s standing, not only within this club but within the game of rugby as a whole, is a huge boost for us as we look towards the season ahead.

“Felipe has spoken so passionately to me about Leinster and wanting to help the players improve so they can achieve their full potential.

“The landscape and the playing group may have changed since he was last here, but the respect that people have for him hasn’t. We are all looking forward to welcoming Felipe back to Leinster Rugby.”

Ahead of his return to Leinster, Comtepomi said: “I spent much of my playing career at Leinster and now I’ll be back in Dublin to join a great staff and to work with great players. All this is a huge motivation and it will be a great experience to continue growing as a coach.

“I also want to thank the people who worked with me over the last few years and especially, the players I had in Argentina XV, for the commitment they had and their desire to learn, because they gave me the opportunity to become a better coach and person.”

The Cork native spent 15 seasons at Munster before spells at Saracens, Newcastle, Bath, Sale Sharks, and Worcester Warriors. The 40 year-old played his final game for the latter in December.

Stringer, who made the announcement on social media, has 98 caps for Ireland and three Triple Crowns and a Grand Slam. He released the following statement: “From the age of five, all I ever dreamed of doing was playing rugby. I cannot describe how it feels to have lived that dream for nearly all my life.

“The journey has been an uncompromising obsession filled with memories I will cherish forever.

“Thank you to my clubs in England - Saracens, Newcastle, Bath, Sale and Worcester who gave me an opportunity to continue playing the game I love.

“However, my proudest days on a rugby field came from wearing the red of Munster and the green of Ireland and will remain with me for the rest of my life. “To those supporters, you are incredible people who stood by me and cheered for me no matter who I played for and for that, I will be forever grateful.

“Lastly, thank you to Debbie my wife, for the last 10 years when I faced some difficult decisions, you were there for me and backed me every step of the way.

“Here’s to the next chapter.”

India coach Ravi Shastri hails ‘one of the greatest series ever’ 14:45
Ireland midfielder Conor Hourihane set for Swansea loan spell 14:25
Richard Keogh has joined Huddersfield until the end of the season 13:25
Jordan Henderson takes up ambassadorial role in support of NHS 13:05
Mason Jones not interested in being the Welsh Conor McGregor 12:01
Crossword Get access to over 6,000 interactive crosswords