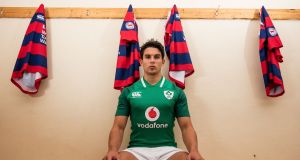 Joey Carbery: “To be honest I’d love a game, I’d love to get a full 80 minutes under my belt and keep it ticking over.” Photograph: Dan Sheridan/Inpho

The big picture trumps individual need. Ross Byrne is expected to start for Leinster this Saturday afternoon against the Scarlets with Ciarán Frawley’s continuing development off the bench if needed.

Joey Carbery wants to go to Llanelli. He wants to play rugby. Doesn’t have to be outhalf, any number will do, because Carbery needs a full game.

“It’s been a long time,” he said at Canterbury’s  “Rising Strength” conference call (the snow denied face time). “To be honest I’d love a game, I’d love to get a full 80 minutes under my belt and keep it ticking over. The last full game I played was Glasgow in the European Cup [in October] so, yeah, so I’d love to get some game time.”

Minutes mean everything to an athlete. “Reps” at training are valuable but being hunted by unknown flankers is what this young outhalf craves. Carbery says he needs them, Joe Schmidt is content to drip feed seconds as the Grand Slam could very easily come down to Carbery.

“I’m doing a good bit of reps in training, it is pretty intense, as close to a game as is possible could be, so I get a good bit out of being in camp and that training. But, then again, nothing is the same as a game. I just got to trust the coaches. They know best. If Joe is happy with me, I must be doing something right.”

Carbery remains stranded in no-man’s land, Ireland’s break-only-in-case-of-emergency option, while Byrne has compiled a highly educational 1,156 minutes as the Leinster outhalf this season with Carbery’s 481 minutes in blue coming at fullback.

When gifted the 10 jersey in November, this 22-year-old torched Fiji – yet missed some kicks – until stepping into Peni Ravai’s 120kg embrace for impact that broke his arm and forced a two-month hiatus.

Schmidt didn’t blink; Carbery remains the alternate. For Six Nations matches past and to follow, Sexton plays in agony until forced ashore. The Paris punt caught by Keith Earls and 45-metre drop goal that beat France guarantees as much against Scotland and on to Twickenham.

“Against Italy I got a half hour which I was delighted with especially to get in at 10 and play a bit,” said Carbery. “Really happy with that. Against Wales . . . to get on for the last six or minutes was great.”

Against Italy he converted three tries and sparked the attack but against Wales he arrived just after Conor Murray temporarily took over from Sexton to slot the crucial penalty. Carbery did convert Jacob Stockdale’s intercept try at the finish.

“That was great for my confidence because no matter how much practice you do at training it is nothing like a game scenario with all the people watching. To get on and get my four kicks helps a lot. With the arm injury I was able to do a lot of kicking, no passing, so I feel it has come on a lot in the last month working with Richie Murphy and Emmet Farrell. ”

It’s a live option should Garry Ringrose or Bundee Aki go down but the current line of questioning cannot cease while a player of such raw talent is sitting on the Ireland bench or going unused by Leinster.

“Obviously playing in one position the whole time would make me better in that position but at the moment learning the different ways of different positions all helps in the end. I’ve said this before as a 10 playing at 15 when attacking you want to catch out the 15, see where his weaknesses are, so playing 15 I learn what’s hard to defend and what’s hard to attack.”

A good attitude seems essential because the odds remain heavily stacked on Carbery being asked to see off Scotland or England or both if Ireland are to win the Six Nations.

“You have to be ready for that. Just trying to think of different scenarios and prepare for them. I’m confident I can come in and do a job. I’m feeling good in myself, I’m in a really good environment and we are winning.

Carbery added: “I do need the game time but if Joe doesn’t want to release me he won’t release me.”

That remains the bottom line.