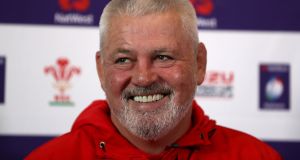 Wales coach Warren Gatland will celebrate his 100th Test match in charge of the Principality in the Six Nations Championship match against Ireland at the Aviva stadium on Saturday.

Ireland’s coach Joe Schmidt will reach a notable landmark of his own as he takes charge of the national side for the 53rd time, moving into joint second place on the all-time Irish coaches list, sharing the exact figure Declan Kidney reached during his tenure between 2008 and 2013, both someway behind Eddie O’Sullivan (76).

Ireland played 78 matches during the latter’s reign but O’Sullivan was an assistant with the Lions (Clive Woodward, head coach) so his Irish side toured Japan in 2005 under the coaching baton of Niall O’Donovan.

It’s reasonable to assume the most important numbers on Saturday will be those on the scoreboard at referee Glen Jackson’s final whistle and that both Gatland and Schmidt would rather a victory than any fuss pertaining to personal milestones, particularly in the context of the match within the tournament.

The 54-year-old Gatland took outright possession of the world record for a head coach in terms of Test matches against Tier 1 countries at Twickenham a little under a fortnight ago. Going into that Six Nations game, the Welsh coach was tied with former New Zealand World Cup-winning coach Graham Henry on 142 matches but moved one ahead at the conclusion of the game.

Henry’s tally includes 103 Tests at the helm of the All Blacks, 36 in charge of Wales and three when losing the 2001 Lions series 2-1 in Australia. Gatland started his career as an international coach with Ireland in 1998, assuming the reins from Brian Ashton, before being replaced by his erstwhile assistant Eddie O’Sullivan in 2001.

He presided over the Irish team for 38 matches, winning 18 and drawing one. Having been successful in European competition with Wasps he was appointed as Welsh coach on November 9th, 2007, and amongst other achievements has led them to a couple of Grand Slams.

On Saturday he will guide them for the 100th time, a figure that would have been a far greater number but for his involvement with the Lions, where he twice temporarily stepped down from coaching Wales to prevent a conflict of interest. Rob Howley (20 matches, 2012 and 2016-2017) and Robyn McBryde (6) deputised in the New Zealander’s absence.

Gatland was forwards coach on the Lions tour to South Africa in 2009 and then head coach for the 2-1 series win over Australia (2013) and the 1-1 draw with New Zealand (2017), racking up a further six Tests to add to his overall tally.

While he has succeeded Henry in terms of the most overall Test matches as a coach he is bearing down on his fellow New Zealander’s record for the most games in charge of a single country (103), something that Gatland will first match and then overtake during Wales’ summer tour to Argentina.

A comparable between Gatland, Henry and Steve Hansen, all of whom have coached Wales at some point in their careers, is that the rounded up percentages see Henry (59% win rate) first, Hansen (53%) second and Gatland (51%) third; the latter though has an impressive 69 per cent win rate in Six Nations Championship matches.

Breaking up the three New Zealanders in the top four of the overall list is current England coach Eddie Jones who has amassed 130 Tests during his time at Australia, Japan and with his current employers.

For the record he won 33 of 57 games with Australia including leading them to the 2003 World Cup final which they lost to England, 34 of 48 at Japan, including the Cherry Blossoms’ World Cup win over the Springboks and 24 in 25 matches with England, Jones sole defeat coming against Schmidt’s Ireland at the Aviva Stadium last year.

In an Irish context O’Sullivan leads the way from his time as national coach (2001-2008), 23 Test matches more than 2009 Grand Slam winning coach Kidney, who on Saturday will be joined by Schmidt on 53 Tests after the game against Wales. In terms of percentage win rates, the current Irish coach leads the way on 71 per cent followed by O’Sullivan (63%) and Kidney (51%).

Irrespective of which team wins on Saturday there’ll be something to celebrate for the respective coaches as well as players.