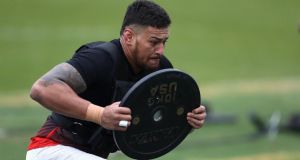 Six Nations: Eddie Jones has made just one change to England’s starting line-up, with Nathan Hughes (above) coming in at No 8 for the injured Sam Simmonds. Photograph: David Rogers/Getty

Eddie Jones has dismissed concerns about the England rugby team’s discipline and claimed that statistical analysis shows “the most successful teams infringe”, a day after remarks from Scotland that questioned the legality of his side’s defence.

Jones was discussing his side’s penalty count during their 12-6 Six Nations victory over Wales – England conceded 10 to their opponents’ two – and insisted that although the “smart guys” say double figures is too high, evidence suggests otherwise. Jones denied, however, that his side actively seek to break the laws, revealing that the referees Wayne Barnes and Glen Jackson have been in camp this week as part of England’s preparations for Saturday’s Calcutta Cup match.

“All the smart guys tell you it’s got to be under 10, but the data doesn’t show you that,” said Jones. “The data shows that the most successful teams do infringe. We certainly don’t try to infringe. We try to play the game legally, and we have referees in for training so we understand the laws of the game.”

On Wednesday the Scotland head coach, Gregor Townsend, said of England’s suffocating defence, “it will be interesting to see whether they stay onside”, before confirming he would be meeting with the referee, Nigel Owens, on Friday, as is standard practice.

Jones opted against returning fire – “If [Gregor] wants to talk about the referee, let him talk about that. I’m concentrating on the game” – instead choosing to warn Scotland that England have left no stone unturned in their preparations for a fixture they have now won eight times in a row, including a 61-21 triumph at Twickenham last year.

Since victory over Wales, England relocated to west London during the Six Nations tournament’s first fallow week and scheduled two days of training against Georgia, followed by a breathless open session at Twickenham last Friday before returning to their Surrey base this week.

“They’ve got to understand we’ve had two very good weeks of preparation,” said Jones. “We had good scrummaging last week against Georgia, we had a fast run at Twickenham, we’ve had two good runs this week. We are ready to play.

“We’re really focused intensely on this game. We’ve had a well-co-ordinated, cohesive preparation. We’ve looked at parts of our game we think we can improve, and we’ve looked at how we can improve physically. We’re ready to go. It’s a massive game. The Calcutta Cup – you don’t get any bigger than this. We’ve prepared for the game. We can’t control that other stuff.”

We watch the videos, we watch what they do in the gym. The only place we don’t have cameras is in their rooms

Jones has made just one change to his starting line-up, with Nathan Hughes coming in at No 8 for the injured Sam Simmonds. England are seeking a 25th win in 26 Tests under Jones – the first was his first match in charge at Murrayfield, two years ago – and the Australian says he is not bothered about artistic merit.

Jones also revealed the lengths he and his coaches go to in order to assess how prepared his side are. “The amount of time they spend talking about the game, players’ faces – they are all the little things,” he added. “Are they on time for meetings? Are they stretching properly? If they are cutting corners then [they] are in trouble. We watch the videos, we watch what they do in the gym. The only place we don’t have cameras is in their rooms.” – Guardian

1 Tipping Point: DeChambeau’s transformation raises questions, but who will ask them?
2 Hatton you heard, it’s Tyrrell’s time despite DeChambeau’s dominance in Detroit
3 Mental clarity in chaos: Novak Djokovic, the man who turned two into three
4 Ken Early: Resurgent United can be the top team – in Manchester
5 Patrick Mahomes reported to have signed 10-year $400m deal with Chiefs
Real news has value SUBSCRIBE