Garry Ringrose gets a chance to stretch his legs 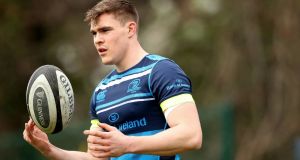 Garry Ringrose’s return from injury commandeers top billing for this Pro14 match both from a provincial and national context. He trained with the Ireland squad on Tuesday, receiving a glowing report card from Andy Farrell in the way he stress tested the Irish defence with his typically slashing footwork and appreciation of running lines.

This game allows Ringrose an opportunity to enhance his match fitness and also for Leo Cullen to examine a potential midfield partnership between Ringrose and captain Isa Nacewa – in the absence of the injured Robbie Henshaw – with one eye on the Champions Cup quarter-final match against Saracens on Sunday, April 1st.

Dave Kearney gets a run at fullback, Barry Daly with eight tries to his name this season, is restored to the wing while on the other flank is James Lowe, the New Zealander an engaging presence off the pitch and a try scoring one on it. He gets a chance to play with “Porridge”, this week or Will Connors as he’ll appear on the team-sheet.

Ciaran Frawley is handed a first start – he made his debut off the bench last week – following injuries to Ross Byrne and Cathal Marsh while Johnny Sexton and Joey Carbery are away on international duty. Nick McCarthy gets a chance at scrumhalf and the Byrne twins, Ed and Bryan, are in the frontrow.

As the business end of the season approaches, opportunities will become more difficult to come by so everyone in the back five of the pack understands that each chance must be grasped fully. James Tracy has recovered from an elbow injury, while St Mary’s prop and former underage international Adam Coyle could make his debut.

There is little doubt that the Southern Kings have improved over the season, albeit with any reward. The onus is on Leinster to iron out the kinks in last week’s performance and ensure that they have momentum when the travel to west Wales in eight days’ time for a crucial top of the table clash against the Scarlets.

1 England v Ireland preview: Ireland’s revival to face its sternest test
2 French new wave stay on course for Grand Slam
3 Devin Toner: it ‘means the world’ to be back in the Ireland side
4 Matt Williams: Ireland will need to step up on Wales display to prevail at Twickers
5 ‘Manchester United are lucky to have you’: Klopp responds to Donegal schoolboy’s letter
Real news has value SUBSCRIBE