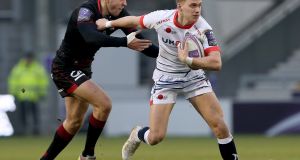 Munster Rugby and the IRFU have confirmed the signing of fullback Mike Haley on a three-year contract from the start of next season.

The 23-year-old from Preston in England is Irish qualified through his maternal grandmother who hails from Tralee, Co Kerry.

He will fill the vacancy left from Simon Zebo’s end of season departure to Racing 92.

Haley joins the province from Sales Sharks where he has made 105 appearances for the Premiership side, including a European debut against Munster at the AJ Bell Stadium in October 2014.

The exciting young talent has gained considerable experience over the past number of seasons, going on to win England Saxons honours on their tour to South Africa in June 2016 as well as representing an England XV against the Barbarians at Twickenham in May 2017.

Commenting on the news Munster head coach Johann van Graan said: “We are delighted to recruit an exciting young playmaker such as Mike. Although only 23, he has over six years of professional rugby under his belt and will be a great addition to our squad.”

“Obviously it was a very, very difficult decision,” Haley said. “I’ve spent many happy years at Sale but after lots of careful thought I just felt that it was a once in a lifetime opportunity I had to take.

“I have a strong family connections with Munster and used to go there all the time when I was younger and being eligible to play for Ireland was another big factor.

“But I will be giving absolutely everything for Sale between now and the end of the season.”

Sale director of rugby Steve Diamond said: “It has been a really difficult decision to let Mike go with us having brought him through from being a teenager and with Mike having a year left on his contract with the club.

“However, he has aspirations to play international rugby with Ireland and we really didn’t want to stand in his way.”

1 Nadia Power determined to push on to the next level
2 College football turns blind eye to Covid-19 by risking players' health
3 Rugby impasse continues as no deal reached in fourth round of IRFU salary talks
4 The Best Of Times: Harrington stares down Garcia in epic Claret Jug battle at Carnoustie
5 Coronavirus has turned Viktor Hovland into long drive champion
Real news has value SUBSCRIBE