Rassie Erasmus set to take over as coach of South Africa 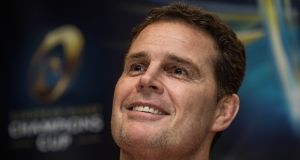 With no other candidates in the frame, former Munster coach Rassie Erasmus’s appointment is widely viewed as a formality. Photograph: Ryan Byrne/Inpho

After a months-long wait, Rassie Erasmus is finally poised to take over as coach of South Africa and take on the task of guiding a team he once graced as a player to victory in next year’s Rugby World Cup.

That was a position that then Springbok coach Allister Coetzee felt was imposed on top of him, and he aimed bitter parting criticisms at SA Rugby’s hierarchy when he was sacked on February 2nd.

But Erasmus arguably arrives as an overdue replacement after a hapless two-year spell in which Coetzee’s Springboks suffered a record 57-0 defeat at the hands of New Zealand, lost at home to Ireland for the first time and away to Italy and slumped to sixth in the world rankings.

With no other candidates in the frame, Erasmus’s appointment is widely viewed as a formality. The new Springbok coaching team is due to be announced on Thursday followed by a news conference.

Erasmus faces a tough start with a game against Wales in Washington DC on June 2nd, followed by three home Tests against England on the next three Saturdays.

But the main focus will be on next year’s World Cup in Japan, for which South Africa are currently considered among the dark horses rather than the favourites.

The 45-year-old Erasmus had success early on in his coaching career when he won the Currie Cup with the unfancied Free State Cheetahs and quickly built a reputation as an innovator.

While in charge of Bloemfontein, he used mobile discotheque lights during matches to relay messages to his players from the coaching box, leading wags to call him “DJ Rassie”.

He also served as technical adviser to the Springboks in the run-up to the 2007 Rugby World Cup in France, which South Africa won.

Erasmus won 36 caps as a loose forward, debuting for South Africa against the British and Irish Lions in 1997 and captaining the side once, in a 32-6 loss to Australia in Brisbane in 1999. – Reuters