England just thinking big but they need a new Neil Back 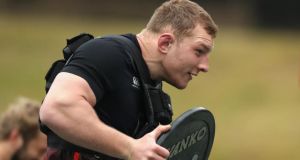 As a contrast to England’s repeated failure to find a successor at openside flanker to Neil Back one has only to look at how New Zealand coped with Richie McCaw’s retirement. McCaw called it a day after the 2015 World Cup with 148 caps but there, ready to take up the mantle, was Sam Cane with more than 30 himself.

The thing with opensides such as that is there has to be a leader of the pack to encourage others to follow. For New Zealand it was McCaw, for Australia it is now Michael Hooper but England have not had one since Back and as a result young flankers coming through do not mould their game in that way.

Yes, Sam Underhill was at Gloucester’s academy but is it any surprise that he is the closest thing England have and a key part of his development was spent in Wales where specialist opensides are far more prevalent?

Players such as Hooper are masters of their profession and it is important to look at what they can do in attack as well as at the breakdown. They are always on the hip of where the ball is, they can offload, they can link up play and roam in the wide channels as well as being the first man to every ruck.

If they are not winning the ball, they are slowing it down and, as seen against Scotland, there was no one able to do that for England. Put simply, they were beaten to the punch and, even though Finn Russell was the official man of the match, I thought Hamish Watson should have been because he was outstanding. Time and again he slowed English ball down and made Danny Care wait that little bit longer to get the ball away.

The problem in England is that the focus for younger players is all about ball-carrying and a desire to fit as many big ball carriers into the team as possible. There is a focus for these players to be as big as possible and to get you as many carries as they can rather than the qualities a specialist openside brings and at the moment England are without that extra dimension. But a few more minutes, a few more games for Underhill and then all of a sudden, come the World Cup, you have a guy on all cylinders.

Against Scotland he came on and adjusted to the pace of the game before his yellow card, albeit against tiring players, and maybe this is something that Eddie Jones will look at. But I don’t think it is fair to say Eddie should have acted sooner on Saturday. You want to back the players you have out there. He has made decisions quickly before – as he did with Luther Burrell in Australia – but he had players who could compete at the ruck and slow it down. Joe Launchbury, Chris Robshaw, Nathan Hughes, Mako Vunipola, Dan Cole – they were just beaten to the breakdown.

As coaches we talk about not waiting for the other player to get there and get over the ball but beating the breakdown. And Scotland were brilliant at that. They just didn’t let England stifle that ball and slow it down.

It’s not as if England were blown off the park. In the second half the power game actually started to get into Scotland and it started to work, the ball-carriers were making dents and, while I know England will be disappointed, in the long run they’ll take a lot out of defeat. They will now work on planning for what happens when a team do raise the tempo of the game. Do they try to take their time, try to bring it back to an arm wrestle or do they try to raise the tempo and match the opposition?

My instinct is that they can’t do the latter so England need to manufacture a tempo they’re comfortable with. That in turn will allow them to maximise the power game with ball carriers coming into the game and allow Nos 9, 10 and 12 to manipulate defences a bit more.

I’ve seen a lot of people are thinking, “Where will England go to now?” But it is important to remember the game is decided on such small margins. I actually think this will benefit England in the long run and do them a lot of good.