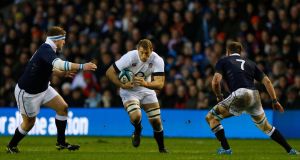 England’s Chris Robshaw says winning a big Test in hostile territory is as satisfying as almost anything in the game. Photograph: Russell Cheyne/Reuters

England’s players insist they will not be affected by any “dirty tricks” which may be awaiting them before their Calcutta Cup game at Murrayfield. Down the years England have experienced everything from rogue bagpipers to tunnel stand-offs on their Six Nations travels and are collectively braced for whatever materialises this weekend.

Harlequins’ flanker Chris Robshaw has particularly vivid memories of this fixture in 2012 when he was captaining England for the first time and a marching band delayed the route of the team bus into the stadium. “We had to go in at a certain time and weren’t allowed to deviate from that,” he said on Friday. “As soon as we pulled in 50 bagpipers pretty much crawled out in front of us.” The players were delayed getting to the dressing rooms but still ended up winning the game.

Last season Ireland were late getting to Murrayfield after their bus was caught in Edinburgh traffic and, with their routine disrupted, began the match so sluggishly they lost 27-22. England were caught up in a row in the tunnel in Cardiff before the Wales fixture in 2015 which Robshaw also remembers clearly.

“We have all experienced things whether it’s going to Murrayfield or Cardiff: tricks and a sideshow to try and put you off, turning the lights off, whatever it might be,” he said. “After the game you have a smile about it but at the time it brings you closer. Little things to try and put you off your game – you’re prepared and have been through it before so you’re ready for it.”

According to Robshaw it is not unknown, even at Test level, for the hot water to be shut off in the visiting dressing room. As long ago as 2004 Sir Clive Woodward was complaining about a large pillar in the away dressing room in Murrayfield which he felt affected his team’s pre match buildup.

These days, in the wake of the Cardiff stand-off when England refused to take the field prematurely, Six Nations teams are required to run out on to the pitch simultaneously but Steve Borthwick, England’s forwards coach, has stressed his players will still need to “adapt” to whatever is thrown their way.

Borthwick was a member of the last England team to lose in Edinburgh in 2008 and was subsequently unimpressed by the manner in which Scotland celebrated their victory at the post-match function. The current England squad, however, have enjoyed plentiful success on the road and Robshaw is looking forward to this latest Calcutta Cup challenge: “It’s always a very passionate place to hear the anthem. The tension in the ground when we meet Princess Anne . . . I imagine there’s always a lot going on around it. As soon as the first whistle goes it will probably erupt as well. It’s just getting used to that. So once we get there it’s about not having that shock factor.”

In Robshaw’s lengthy experience, winning a big Test in hostile territory is as satisfying as almost anything in the game. “It’s great at home when you have 82,000 cheering you on and makes it a bit easier. But away from home you just have pockets of fans here and there, and it brings you closer together as a unit. It’s you against everyone there and you’re going right into the heart of the fire.

“When you’re defending and defending, and come out the other side it makes you grow another inch. That’s why going away from home is always exciting. Whenever you play in these games there’s 5 per cent more in every opposing team. The challenges are big and there’s a bit of niggle. There have been some hard-fought battles in Scotland and I’m sure this will be the same. We just want to play as well as we can and most importantly win. We’ll take that whatever way it comes.”