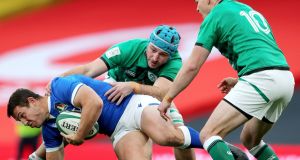 Looking every inch like Johnny Sexton’s bodyguard, Will Connors first tackle in an Ireland shirt was a no frills shoulder into the hip of Italian centre Carlo Canna.

The flanker bounced to his feet before the scrumhalf had cleared the ball.

We got the sense long after the Aviva lawn had been trimmed and broadcaster machinery wheeled away that this Kildare openside could still be out there hunting shadows.

Man of the match on his first cap for Ireland, Connors gives off that rare vibe of an athlete who improves alongside the standard. He keeps it simple. He rushes up and puts bigger men on their backs with a flawless technique that will never betray him.

For prosperity, we shall highlight the tackles that would have elicited heavy roars from the crowd.

On 27 minutes two friends - making their international debuts together - had their family bubbles swelling with pride. As Hugo Keenan followed up his booming kick to Italy fullback Jayden Hayward with an arm swinging grip, Connors flattened the Kiwi before arching over the ball just as Tadhg Beirne arrived to destroy the ruck.

When the referee blew for an Ireland penalty the Clongowes old boys embraced on the ground. Cian Healy also gave Connors a hug. Sexton kicked for touch and off the next attack Robbie Henshaw’s long pass saw Keenan dance past three defenders for his first try.

“It’s unusual but I’m unbelievably grateful to even be out here,” said Connors afterwards. “It’s obviously a tough time for the country and people have to abide by legislation, stay at home, and being able to go out there today was extra special, just being able to express ourselves.

“I suppose not having people clap you out and stuff is tough because everyone wants to be here and drive the team on. It is difficult in that aspect but it was still incredibly special.”

Managed to speak to the family yet? “Yeah I got on a quick call there, there wasn’t many words exchanged, it was quite emotional.”

The openside’s existence remains fraught with peril: David Pocock’s body has finally succumbed to frightening amounts of wear and tear. Over the weekend, Siya Kolisi was almost beheaded at a ruck. Sam Cane recently recovered from a broken neck to produce a menacing performance for the All Blacks.

Welcome to the big leagues Will Connors.

The general consensus before kick-off was little to no knowledge about a 24-year-old who has quietly made his way past a long queue inside the Leinster dressingroom. Scott Penny made serious statement at the RDS (before Leavy’s arrival), Josh van der Flier could not make Saturday’s match day squad and Munster captain Peter O’Mahony was unable to convince the coaches of his value at openside.

The presumption, until now, was that Connors would slip under the radar of such phenomenal talent.

“Every boys dream is to play for Ireland,” he said. “I’ve had a few injury set backs over the last while but constantly this was the goal, where I wanted to go. I kept trucking away. I knew my time would come if I just kept at it. It is an unbelievably competitive position but that’s just the beauty of it - we are all pushing each other incredibly hard.

“Even Josh was great helping me to expand on my breakdown game.”

“I suppose I did get knocked back a few times but I’ll look at that, see what happened and, like you said, I don’t want to be a one-trick pony. I’m constantly trying to work on my weaknesses.”

The clock had turned red when Connors exploded off the line - as if it was minute one - cutting the legs from underneath Italian number eight Jake Polledri. That was tackle number 17. Two phases later he thumped into Polledri yet again. There was one last kamikaze effort, punished by a vicious clear out, but onto his knees and then feet he climbed.

“At the end of the day it’s a game of rugby and if you over think it you’ll get lost in the moment.”

Others can over think it for him. A number seven has not produced a debut at Lansdowne Road of similar élan since Richie McCaw in 2001. Nobody’s comparing but Will Connors is part of the international openside conversation now.