Eimear Considine and Laura Feely ruled out of Saturday’s encounter 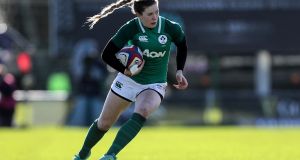 Following “inconclusive outcomes” from Covid-19 testing, Eimear Considine and Laura Feely have been ruled out of Ireland’s Six Nations match against Italy on Saturday at Energia Park in Donnybrook (6.30pm, live on RTÉ2).

“This decision is a precaution following inconclusive outcomes of Covid-19 tests on one player and a resultant potential close contact with two other players, one of which is not in the match day team but is part of the wider squad,” read an IRFU statement.

However, on Thursday night, the player that had the “inconclusive test” returned a second test that was negative.

“The player and her two close contacts from the squad are no longer required to self-isolate,” said the IRFU via an emailed release. “The players will return to the squad following the Italy game this weekend.”

Considine, the Ireland fullback, is a significant loss due to her brilliant form before lockdown but also because it forces coach Adam Griggs to reshuffle his back three with Lauren Delany moving to 15 and UL Bohs’ Laura Sheehan coming onto the right wing for her fourth cap. Harlequins prop Leah Lyons replaces Feely on the bench.

There remains a strong balance to the Ciara Griffin led side with Claire Molloy returning to the backrow alongside Blackrock’s Dorothy Wall.