Hugo Keenan and Will Connors: The best of friends, the best of debuts 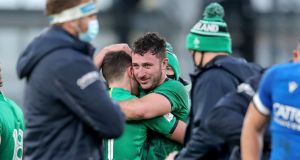 Imagine two best friends winning their first caps for Ireland in the same game. Imagine the coach mentioning their strengths post match. Imagine there is a debate about which one of them was man of the match.

Right about now, life must feel pretty perfect for Hugo Keenan and Will Connors.

“It would be interesting to see Hugo’s GPS and Will’s tackle count,” said Andy Farrell after the 50-17 dismissal of a poor Italian side.

Keenan played on a Blackrock College team that has, so far, produced three internationals. He being the third behind Joey Carbery and Caelan Doris. In the 2014 Leinster schools final they beat a Clongowes team that included Connors.

“Will is one of my best mates, our dads get on very well together and we made our European Cup debuts together against Saracens about a month ago, we have grown up together and it was really special to make the debut together. Seeing him go so well, win the man of the match, put in so many tackles, it is just great to see.”

We cannot get hold of Keenan’s GPS but Connors made 14 mostly chop tackles spread over 80 relentless minutes.

Other current professionals from that ‘14 final are Clongowes scrumhalf Rowan Osborne and Blackrock quartet Nick Timony, David O’Connor (both at Ulster), Jeremy Loughman is holding it down in Munster and Conor Oliver is looking sharp out west with Connacht.

Enough ancient history. This was Keenan’s day. And Connors’ too. It will always belong to the pair of them.

“It was an unbelievable experience, the stuff of dreams,” said the former Mount Merrion footballer. “The lads put in some shift and made it easy for me, so to have two tries as well was something special.”

Keenan, a striker to his fingertips, could have legitimate regrets about the hat-trick that escaped his grasp but the 24-year-old saw it a different way.

“As Ed Byrne [another first capper] says, the third would not have come about had the second not been disallowed. So I will take two any day of the week. I was just finishing off the scores - the other lads had done the hard work”

Do not pay him any heed. Both tries needed finishing, international calibre finishing, which he duly supplied.

The rise of Keenan may seem rapid to the fair weather supporter but it’s been a long road to stay on the coattails of ridiculously gifted schoolboys like Carbery and Doris. That said, he never looked out of his depth playing alongside them or on James Ryan’s historic Under-20s or the Sevens circuit (take a bow David Nucifora and Anthony Eddy for that bright idea).

“I have been tipping away, when I was in the Sevens and then the first games with Leinster, you don’t really look too far into the future.

“Scoring a try today was very special, such a cool feeling with the lads celebrating with you, it was not the way (with no fans being there) how you would have imagined but it was a great day.”

The hat-trick of tries are worth revisiting even if one of them has been rubbed off the record.

The first, Ireland’s second, can never be forgotten, especially by the fathers watching their sons hammer into Italy fullback Jayden Hayward, off a clever Keenan kick, as Connors drove over the ball to secure an Ireland penalty. Johnny Sexton kicked to touch and from the lineout, gathered by Ryan, Sexton ran a decoy line to the right before a brilliant long pass by Robbie Henshaw presented Keenan with a one on one against Hayward. He stepped inside the fullback and carried Eduardo Padovani and Luca Morisi over the try line.

There was nothing easy about it.

The disallowed try came moments later when Jacob Stockdale punched a hole in the Italian defence before Keenan out sprinted Carlo Canna. Turns out Ryan blocked a prop who might have tackled Stockdale. It was a harsh, over fussy call by the officials.

No worries. Within seconds we were witnessing the play of the game as Doris ripped the ball off Marcelo Violi in the Ireland 22 to spark a counter attack that looked to have run out of steam when Conor Murray took his time to weigh up his options. The veteran scrumhalf knew precisely what he was doing, drawing two defenders before a lovely grubber was gathered by Keenan in full sprint.

“It is tough, the step up in intensity, the ball in play time was quite high, the physicality level is challenging but I enjoyed the challenge.

“You play what is in front of you - you just chase your kick chases, you work hard, the team is not going to be picked on GPS stats, it is just a side note. Andy has been great, all the coaches have been, it gives you such confidence going into the game. That showed with all the lads.”

It showed with the best friends.