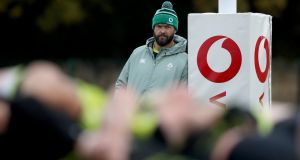 The 2020 Six Nations Championship feels like it belongs to a different time, a different age. When Ireland began their campaign with a win over Scotland on February 1st, life was still normal.

Fast forward nearly nine months and Ireland will resume their campaign against Italy at the Aviva Stadium on Saturday - a fixture which was originally scheduled for March 7th.

It was as the Six Nations began to approach a crescendo that the world slowed down, and the Covid-19 pandemic saw the tournament’s final four fixtures postponed indefinitely.

Four sides are mathematically still in title contention as the Championship resumes - Ireland, England, Scotland and France - with Eddie Jones’s World Cup runners-up currently in the driving seat for silverware.

And so as Andy Farrell’s side finely return to action, here is a reminder of what has happened so far in the 2020 Six Nations, and everything you need to know ahead of the remaining games.

The resumption of the 2020 Six Nations Championship, starting with Ireland’s clash with Italy at the Aviva Stadium.

Andy Farrell’s side meet the Azzuri at the Aviva Stadium on Saturday October 24th (kick-off 3.30pm).

With the country readjusting to life under Level 5 Covid-19 restrictions, going to the pub or to a friend’s house to watch the match this weekend is now off the cards. Ireland’s clash with the Italians will be broadcast live free-to-air on both Virgin Media One and ITV. You can also follow all of the action via the Irish Times liveblog, which will be up and running from around 3pm on Saturday afternoon.

What are the remaining fixtures?

What were the results so far?

So, talk us through what’s happened?

Ireland headed into the Championship with a new coaching ticket as Andy Farrell replaced Joe Schmidt, who stepped down in the wake of a disappointing Rugby World Cup campaign in Japan last November. His first match at the helm saw Johnny Sexton score all of the points in a 19-12 win over Scotland, with Stuart Hogg memorably botching a golden chance as he dropped the ball over the try line in Dublin.

Ireland then followed up with an impressive, expansive 24-14 win over Grand Slam champions Wales at the Aviva which left them firmly in the picture for the title. However they were brought crashing back down to earth in round three, and some familiar vulnerabilities were on show in a 24-12 defeat to England at Twickenham. Farrell’s side have two matches remaining, at home to Italy and away to France.

Les Bleus also entered into the Championship under the new management of Fabien Galthié and made a huge statement in their opening fixture as they beat tournament favourites England 24-17 in Paris. Victories over Italy at home and - eye-catchingly - Wales in Cardiff put them on course for the Grand Slam before those ambitions were derailed by a 28-17 defeat to Scotland at Murrayfield.

England meanwhile recovered from their early set-back at the Stade de France with wins over Scotland (13-6 at Edinburgh), Ireland and Wales (33-30 at Twickenham). With one fixture left - away to Italy - they are in the driving seat for the championship.

Elsewhere Wales got off to a tough start to life under Wayne Pivac following the departure of Warren Gatland after last year’s run to the World Cup semis. The defending champions opened with a 42-0 win over Italy in Cardiff but a round two defeat to Ireland in Dublin was followed by agonising defeats to England and France.

Scotland have a brace of wins to their name - against France and Italy - while Italy are rooted to the bottom of the table and remain on course for the wooden spoon.

What are the permutations?

England and France are currently top of the table on 13 points but Ireland - currently on nine - can leapfrog both win a bonus point win over Italy. Another bonus point win over France the weekend after would be enough to secure the title. England however have a superior points difference to Ireland and France and take on Italy in Rome on the final weekend - if they pick up a bonus point victory at the Stadio Olimpico they could prove difficult to overhaul.

Andy Farrell has handed Test match debuts to Leinster duo Hugo Keenan and Will Connors on Saturday, with the uncapped Ed Byrne and Jamison Gibson Park also named on the bench. Farrell has also opted for Bundee Aki in midfield to partner Garry Ringrose, with Jacob Stockdale starting at fullback.

In his column this week Gordon D’Arcy has looked at how Ireland’s attack might shape up, as they bid to play “heads up rugby,” and he suggests Aki could be the man to get the nod alongside Ringrose at centre.

“Thankfully we have moved on with a desire to play ‘heads up’ rugby. This is a mindset shift, a feeling of empowerment among the players to go for opportunities whenever they present themselves.

“Sounds so obvious, but it needs to be put into practice. Ireland have the skill set but they will make mistakes. Lots of them. Italy will not punish them but France might take advantage of poor execution.

“Sexton can throw those spectacular Russell balls but he won’t do it when Jack Nowell is standing in the passing lane waiting to intercept.

“If Ross Byrne features I would expect his usual, reliable game with the emphasis moving onto Bundee Aki to distribute out of contact while those outside him have more scope to add to Ireland’s attacking game.”

England’s Matthew Carley is in charge of Saturday’s clash in Dublin.

Unfortunately not - all sport in Ireland remains behind closed doors due to the coronavirus pandemic.

Saturday will be quite warm for late October - around 15 degrees - and it’s expected to rain.