Connacht braced for a tough test in Edinburgh 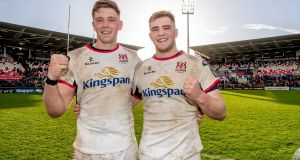 Ulster will look to continue their unbeaten start to the Guinness Pro14 season when they host the Dragons at the Kingspan Stadium on Sunday afternoon (3.0, live on Eir Sport).

Dan McFarland’s side have won their first two matches and sit second in the Conference A table behind Leinster.

Ulster’s openside flanker Marcus Rea will be hoping to once again join his older brother, Matty, in the backrow aware that every opportunity is precious as he’s endured a few injuries along the way.

He said: “It’s hard to be patient but there were times when I tried to be as mature as I could about it.”

The Irish international faces plenty of competition in that area of the squad, including talented young players like David McCann.

McFarland will announce the team to face the Dragons tomorrow.

Connacht travel to play a winless Edinburgh at Murrayfield (7.35, live in Eir Sport) also on Sunday and head coach Andy Friend has spoken about how his team need to be sharper in several aspects of their play, one of which was in exiting their 22.

“Edinburgh and Cardiff play a similar style of game. We knew what we needed to do [in Cardiff] and we did it on the whole. We did it very well.

“On the four occasions out of the 21 that we chose not to to do what we said we were going to do [stick to the exit plan], we leaked 21 points. The evidence is pretty clear for us, stick to the game plan, stick to the task and it will work for us.”