Schmidt has window of opportunity to increase Ireland’s depth 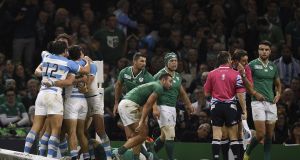 Argentina players celebrate after their third try during a World Cup quarter final victory against Ireland in 2015. Photograph: Franck Fife/Getty/AFP

Defeats rankle with Joe Schmidt but none of them are on the scale of the World Cup quarter-final defeat to Argentina. Despite a manifest and unnecessary fear of outstaying his welcome in Ireland, it was assuredly one of the primary reasons he opted to extend his stay to the 2019 World Cup. More than anything it’s something he desperately wants to put right.

What still agitates him more than anything is the carnage which an uber-physical French side wreaked on the Irish squad in the fallout of the pool-deciding win in Cardiff two years ago. To lose Johnny Sexton, Paul O’Connell, Sean O’Brien, Peter O’Mahony and Jared Payne for that aforementioned quarter-final a week later in the same city was simply cruel.

Even then, Ireland thrillingly recovered from being skinned out wide early on to come back to within a missed penalty of drawing level in the second-half, but the damage had been too wounding. It is to be fervently hoped that the group stages two years’ hence, which most likely will culminate with a game against the bruising Samoans, will not exact a similar toll.

But casualties there assuredly will be, and Schmidt and co are determined to ensure they have the strength in depth to cope.

One of the anomalies of the Schmidt rein is a perception that he is in essence a conservative selector. Yet the blooding of eight more previously uncapped players on the summer tour to the USA and Japan takes the total number of players given their first caps under his watch as Irish head coach to 45, exactly half of the 90 players used in that period.

Following on from the summer tour, the 21-year-old Jacob Stockdale and 20-year-old James Ryan, who enjoyed try-scoring debuts against the USA, along with Andrew Porter, Kieran Treadwell and Rory O’Loughlin all make the cut again, whereas Dave Heffernan, Rory Scannell and John Cooney didn’t.

By comparison, since the start of the 2013-14 season, Wales have capped 30 new players, including 11 on this summer’s South Seas tour.

Prior to those 11, only three had been capped since the 2015 World Cup – Ellis Jenkins, Cory Hill and Sam Davies.

That figure of 45 is liable to rise to 49 over the course of this month’s Guinness Series, given the inclusion in the squad of Bundee Aki, Chris Farrell, Darren Sweetnam and Adam Byrne. The Fijian game looks like the one which offers the most scope to blood these players, although Aki must be vying with the once-capped Stuart McCloskey as a midfield partner for Robbie Henshaw. When the sides last met in 2009 at the RDS, Declan Kidney gave debuts to Johnny Sexton, Seán O’Brien and Seán Cronin.

Certainly, the word “friendly” is also something of an anomaly in the context of Test rugby, not least when South Africa and Argentina roll into town. The Springboks and the Pumas don’t really do friendly, and even Fiji don’t constitute the relative sort that Canada, Georgia and even Samoa have been in previous autumnal windows.

Accordingly, following on from last year’s momentous November, the South Africa and Argentina games are already sold out while even the Fijian match virtually is, with 48,500 tickets already sold.

Nonetheless this series, along with next summer’s three-Test tour to Australia and next year’s November matches, offer more opportunity to expand the squad’s base than the next two Six Nations. Schmidt said as much this week when speaking about giving opportunities to players and confirming “you’ll see a few changes through the three Tests”.

“So for us, a really positive Guinness Series is to continue from Japan a little bit. We don’t have too many windows. The next window is a massive pressure cooker for us. It’s the Six Nations. It’s the big competition of the year.”

“If we want to get a window where we can still look to be as competitive as we can be but also grow the group a bit, this is our window, and that’s part of our strategy behind some of those guys in the back three. It’s part of the strategy in the secondrow and in the frontrow.”

“In summary, it’s just an opportunity in the middle of the pitch as well. Training today, it’s funny to see Robbie Henshaw being the small centre with Stu McCloskey and Chris Farrell there. We used to have Darce and Drico there – it’s a novelty,” he said, smiling at the recollection of how Gordon D’Arcy and Brian O’Driscoll defied the increasing preponderance of big men in the midfield jungle.

“There are some exciting new guys involved and we’re excited about seeing how they go. If they go well I think that’s a successful Guinness Series for us, because it’s an investment for us, that we want an immediate return on but that we’re prepared to also take a longer-term view with.”

This still has to be balanced with the expectations of the home supporters, with Ireland also protecting their ranking of fourth in the world. The toughest assignment could well be the Boks, ranked fifth in the world.

The Springbok coach, Allister Coetzee, who has blooded 19 new players since taking over after the 2015 World Cup, has named another four uncapped players in a strong squad again led by Eben Etzebeth, who last week declared he would be fit to resume training on Monday after recovering from an ankle injury. The Munster-bound Johann van Graan will also be part of their coaching team.

The Boks’ 57-0 thrashing by New Zealand in Albany on September 16th is still used as the reference point for their season, but they have responded since with a 27-all draw away to Australia, before losing 25-24 to the All Blacks in a thrilling encounter in Cape Town four weeks ago. Indeed, those defeats to the All Blacks have been their only losses in nine games this year.

“I know they lost Jean-Luc du Preez, who was looking incredibly impressive in the Currie Cup final last weekend but the people they’ve got – Eben Etzebeth has grown as a leader in that group and is still incredibly young – their average age would be mid-20s and I think it is a team for the future that is right here, right now one of the best that any country could hope to have.

“For South Africa, we would love to be really competitive and get our noses in front, obviously.”

The Fijian squad includes most of their front-line, overseas-based players, such as Racing lock Leone Nakarawa, Newcastle centre Vereniki Goneva and winger Timoci Nagusa, while there remains a possibility that the latter’s Montpellier team-mate, Nemani Nadolo, will be added to the squad.

Fiji have risen to ninth in the world rankings after wins over Samoa, Tonga, Italy and Scotland this year, and they begin their tour against Italy in Sicily next Saturday.

Argentina, whom Ireland will be meeting for the first time since that World Cup quarter-final, have had a tough time of it in 2017, slipping to 10th in the world after a two-Test home series to defeat to England was followed by six defeats in the Rugby Championship.

They have actually produced patches of wonderful rugby, and have been highly competitive in a host of entertaining fixtures, but they are suffering as much for their discipline as they are for their policy of not picking players based overseas such as the Toulon eight Facundo Isa and the prolific Racing winger Juan Imhoff.

But they still have some star turns from that day in Cardiff, such as redoubtable skipper Agustin Creevy, athletic flanker Pablo Matera and fullback Joaquin Tuculet. After playing England and Italy over the next two Saturdays, the game against Ireland marks their final match of their tour and their year.

Looking ahead to the Fijian game, Schmidt said: “That’s going to be a real physical challenge. The last two years we’ve had Canada and Georgia in those middle Tests and it’s given us a little bit of an opportunity to come up for air.

“There’s no coming up for air with some of the behemoths they have and the way they move. They’re a fantastic, athletic team, Fiji, and you only have to look at Nakawara and the skill element that he brings; the footwork of Tuisova, the immense power that Nandolo brings, and that was pretty evident at the RDS recently.

“So those sorts of guys are going to be a real handful for us and then Argentina. We know Argentina pretty well and the disappointment we suffered last time at their hands, we’d love to rectify that.”

“We’d love to scrape our way through with the right result and get three results but I think the quality of the performance of some of the individuals that we’re looking to give an opportunity to, that will be equally important for us.”