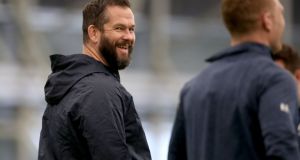 Bono didn’t so much sing as test the Irish waters by riffing some new lyrics.

Rugby news first: Andy Farrell’s Ireland head to Twickenham with an unchanged team. The performances of Munster backrows Peter O’Mahony and CJ Stander in victories over Scotland and Wales, to set up a tilt at the Triple Crown, means Caelan Doris must be satisfied with an impact role having recovered from concussion. Max Deegan makes way.

But that’s not the real story of life in Ireland camp this week.

Motivation ahead of facing England comes in many forms – Bono, Paul O’Connell and Farrell returning to face the team he coached with his first-born son, Owen Farrell, the opposing captain.

“You don’t go to England and win on your own,” said Farrell – the former English rugby union and Rugby League international – at the team announcement in the National Indoor Arena. “You win as a collective. That’s what we have been talking about this week.”

The U2 front man spent an hour and 40 minutes in Carton House on Tuesday evening, staying 40 minutes over the planned visit.

“Not too much singing actually,” said Farrell. “We were blown away really that he gave his time up to come over and see us. We invited him in, he was top of the wish list, and we got the top which was unbelievable.”

Bono spoke about the bond that has kept U2 together for so long, interactions down through the years with crooners like Frank Sinatra and what it meant to be “Irish” in America in the early 1980s.

“He is obviously a proud Irishman so he spoke a bit about Irishness.”

At your service, Sir… and always at the service of a truly great Irish team…! Bono @JohnnySexton @IrishRugby pic.twitter.com/lhv2T4oKQg

On a slightly lesser note, O’Connell is in the Ireland camp until they fly to London on Friday (when the former Ireland captain will switch to his media duties with the BBC).

“We like it when people come into camp,” Farrell explained. “We try and invite as many people as we possibly can. It was not just Paul who came in this week. We like people to take stock from the outside, to get the feeling of how camp is. Paulie is here to observe and come to all the meetings and share his experience along the way and try to connect to the boys.

“He has been there and done that, been to Twickenham a few times, played a few big games, so he knows what the boys are going through. You see a lot more of the boys gravitating towards him and that’s great to see.”

Considering this proud son of Wigan is guiding Ireland towards an England team led by son, it was put to the 44-year-old that this might be the most challenging week of his coaching career.

“I’ve spoken to him two or three times . . . nothing new there. Bit of FaceTime, talking to my grandson.”

“You tell me. He’s never whinged no matter where he has played.”

Farrell played down the significance of Ireland’s last visit to Twickenham, a 57-15 hammering last August, before adding that it rattled the group.

“It was a warm-up, two teams at different levels, we came away from training camp in Portugal having not done any type of contact work whatsoever.

The equally chastising defeat to England in Dublin last year will also be dropped into the motivation pot this week.

“The game at the start of the last Six Nations was more of a fairer balance of where they are at as a team. They started really well, fast and explosive. They used an attacking kicking game to great effect, pinned us into the corners.”

“You can’t go to Twickenham and hope it just goes well for you. It takes a big old effort from the group.”

Bono, O’Connell and a few others have already played their part.