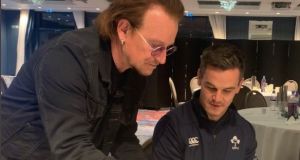 Bono happy to serve Jonny Sexton during his visit to the Ireland squad at Carton House.

“Spending time with Bono is like eating dinner on a train – feels like you’re moving, going somewhere,” wrote Bob Dylan in Chronicles.

Paul Hewson’s top three moments have to include encouraging Dylan to record the 1989 album Oh Mercy, his own band’s The Joshua Tree and, as of last Tuesday night, serving Johnny Sexton dinner bumps his humanitarian efforts in Africa.

This happened in Carton House.

“It was just a really cool evening,” said Jacob Stockdale.

Motivation ahead of Ireland’s journey to English rugby HQ comes in many forms; the lyrical words of U2’s front man, Paul O’Connell’s quiet observations and Andy Farrell seeking to burn down the citadel he once defended, while his first born son, Owen, mans the gates as opposing captain.

The audience with Bono, and wife Ali Hewson, quickly turned to “Irishness” and what that means when Swing Low resounds around Twickenham on Sunday afternoon.

“Faz wants to give us a sense of our identity,” Stockdale continued.

“He is doing that through our training but also through things like speaking to Bono and last night he talked about Irishness, what it means to be Irish and what’s special about it. That’s definitely something that Faz is bringing in and something we as a team are really buying in to. It is quite exciting.”

“We asked him this and he gave a great answer,” said CJ Stander.

“I’m not saying it is in me but I have seen it over the years coming out of players and people,” the South African explained. “He said it is something that comes out when the going gets tough.

“He spoke about a few incidents in America . . . just about when it is tough people have to stand up.”

What happened to Bono in America?

“Just people he met and he had a few troubles now and then. He didn’t really elaborate on that, we wanted to know more flashier stuff.”

Bono spoke about the bonds that have kept U2 together for 44 years and interactions down through the years with crooners like Frank Sinatra.

“He is quite a private person really but he put a lot of time and effort into being able to answer questions from the floor in a great manner that we got something out of,” said Farrell.

Let’s rein in the wild horses: Bono’s words are genuinely being stirred into the motivational pot before facing England?

“Definitely,” said Cian Healy. “We even had a chat this morning about our favourite parts or what lines kind of resonated with lads and everyone had something a little bit different from it. There’s some correlation in how they’ve treated their band and how you treat a team.”

A fellow northsider, what was Healy’s favourite moment?

“I was asking about [U2’s] longevity over the time and how things stay relevant. I kind of liked that answer best. They went into the teamwork and the desire and need for it. Needing to be round each other and needing each other to succeed.

“He was a good rambler now.”

The guitar of video analyst Vinny Hammond lay idle in the corner but, as Farrell admitted, nobody had the courage to offer it to him.

“He gave us a few lines of something he was thinking about,” said Stander. “It was more a chat, just giving us life lessons.”

Murray: “He actually did a little bit.”

Stander: “It was supposed to be for an hour but he went over, an hour and 40, which was unbelievable. I checked the watch and it felt like 10 minutes. He can talk. Honest chat, honest chat to all of us.”

Stander never got to meet Nelson Mandela but his brother-in-law, the swimmer Ryk Neethling, did after winning gold in the pool at the Atlanta Olympics in 2004.

“I would have loved to ask him how it was to be in his presence...I sent pictures to my mum and dad and my family. They went mental. ‘Get a picture with him!’ but I didn’t want to, you can’t have 45 guys walking up and asking. He gave some life lessons, few quotes, few words, it was good to chat to someone that has been at the peak of his career his whole life and to have no trouble. To see him and his wife happy together that was unbelievable.”

Were the younger Irish players more excited to see Bono or Paul O’Connell?

“The young lads wouldn’t even know who Paulie is,” laughed Stander.

The former Ireland captain is spending the week in camp before linking up with the BBC in London.

Murray: “He has been lurking around but for the lads who don’t know him that well just to be able to sit down and have a chat with him and listen to him, similar to Bono in a way, just getting as much knowledge and information out of him as you can, Just having a guy like that with the presence he has and what he has done in the game is great to have around.”

Bono and Paul O’Connell, a line has been drawn in the sand. If anyone has a contact for Phil Lynott or Michael Collins please forward them to the IRFU offices on Lansdowne Road.