John O'Sullivan: South African referee has made some controversial calls in the past 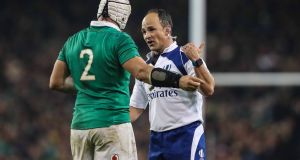 Rory Best couldn’t persuade Jaco Peyper to go the TMO to check on a try for Fekitoa which was disputed by the home side during the defeat against New Zealand in November 2016. Photograph: Billy Stickland/Inpho

South African referee Jaco Peyper will take charge of an Ireland Test match for the fourth time when Andy Farrell’s side take on England at Twickenham on Sunday.

And Ireland will hope this game won’t have the controversial overtones of a couple of previous games over which he presided.

The 39-year-old refereed his first match involving Ireland a little over seven years ago in November, 2012 against Argentina at the Aviva Stadium.

Ireland, then under Declan Kidney’s coaching baton, beat the Pumas 46-24 with Ulster’s Craig Gilroy scoring an early try on his debut. The home side crossed for seven tries in total with Jonathan Sexton and Tommy Bowe grabbing a brace, apiece, while Richardt Strauss and Simon Zebo also touched down.

Ireland have since played 86 Tests, including that win over the Pumas, with Nigel Owens (Wales) and England’s Wayne Barnes, two of the top referees of their generation, leading the way having presided over nine matches each respectively.

They are followed on the list by a couple of French officials, Romain Poite and Jerome Garces and New Zealand’s Glen Jackson, who hangs up his whistle next month.

Of the 20 referees who have officiated Irish matches in the timeframe in question, Peyper’s three games come in at tied 10th on the list, alongside Steve Walsh (New Zealand), Ben O’Keeffe (New Zealand) and Marius van der Westhuizen (South Africa).

On February, 13th, 2016 Peyper refereed Ireland’s 10-9 defeat to France at the Stade de France, a hugely disappointing and frustrating occasion for the visitors on a sodden Parisian day. Joe Schmidt’s side led 9-3 at half-time but didn’t score a point in the second half.

There was one further cavil as Schmidt explained after the game: “There’s obviously the try scored by Dave Kearney that the referee blew up early and therefore couldn’t go to the TMO [Australia’s, George Ayoub], but obviously it rebounded off the midriff of Robbie Henshaw. ”

If Ireland were a little sore metaphorically after Paris then it was to prove even more of a physical pain nine months later when Ireland lost 21-9 at New Zealand at the Aviva Stadium, two weeks after they had beaten the All Blacks for the first time in their history in Chicago.

Peyper had his hands full from the get-go, Sam Cane’s “tackle” on Robbie Henshaw, saw the Ireland centre depart on a stretcher and inside the first 22 minutes he had been joined by teammates, Sexton and CJ Stander in what would prove to be a physical brutal encounter. Henshaw, Stander and fullback Rob Kearney all had to undergo Head Injury Assessments (HIAs) after the match.

The South African brandished two yellow cards, the first to All Black scrumhalf Aaron Smith and the second on 48 minutes to centre Malakai Fekitoa for a high tackle on Simon Zebo.

Indeed Fekitoa was to have a very high-profile afternoon, scoring two tries, the second of which was disputed by the home side on the basis that Beauden Barrett’s pass to TJ Perenara in the build-up may have been forward.

“I just went up to him to ask him to have a look at it. He said he cannot go to a captain’s call, which is fair. I tried to explain there was a lot at stake not to look at it; it was a one-score game at the time.”

Schmidt’s verdict at the time: “I don’t assess the referees. They have an assessor... We will feed our feedback through the appropriate channels. They will send out edicts and we will try and keep the game safe and make it enjoyable.”

Since that game Ireland have played 38 Test matches without Peyper in the middle, although that figure is skewed slightly by the fact he was due to referee a World Cup warm-up match against England at Twickenham last summer but was replaced by Nigel Owens due to travel issues.

At the World Cup in Japan he copped some flak for a photograph, amongst Welsh supporters, which saw him mimicking the swinging elbow that saw him send off French secondrow Sebastien Vahaamahina against Wales.

At the same tournament didn’t endear himself to Scottish supporters for calling a crooked feed against Samoa at a scrum that pre-empted Japan’s bonus point try in that pool match.

Peyper looks to reward scrum dominance, likes a clean, crisp breakdown and relies heavily on his TMO – on Sunday’s it’s his fellow South African, the experienced Marius Jonker – to flag foul play. Facially he occasionally offers a slightly bemused or perplexed expression that can be construed as uncertainty but ultimately he does back himself; right or wrong.