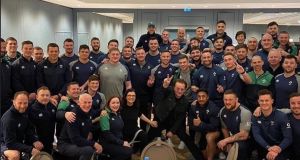 Bono with the Ireland rugby squad as the build-up continues for the big Six Nations clash against England at Twickenham.

Ireland’s new English head coach and new backs coach may have both played and coached the country of their birth, but Andy Farrell is endeavouring to ensure that his team brings all of their Irishness to Twickenham for Sunday’s meeting with the auld enemy.

To that end not only did Bono speak with the squad on Tuesday evening but Paul O’Connell has also been in situ at the IRFU’s HPC at Sports Campus Ireland this week and will remain with them until tomorrow.

“It is something that we talk about you know, that the boys talk about and there is quite a bit that means a lot to the boys internally,” said Farrell of this desire to heighten the team’s sense of Irishness.

“We also talk about the external part, of what it means to be part of the group. Sometimes you can get a little bit lost in your own bubble and it’s certainly nice to hear from people that’s been at the top for as long as somebody like Bono has been, to reintegrate what it really means to be a proud Irishman.”

No less than the U2 frontman, Farrell and co didn’t pick a bad one in O’Connell. In a dozen starts against England, O’Connell had an 8-4 winning record, and in the Six Nations it was a faintly ridiculous 8-2. Going into the first of those games in 2004 at Twickenham, Ireland hadn’t won there in a decade and had been trounced in their previous three visits.

But O’Connell was like a force of nature in that seminal 19-13 win which led to the Triple Crown, and he was on the winning side twice more in the Six Nations at Twickenham, in 2006 and 2010, as well as suffering two losses, badly in 2008 and narrowly in 2014, when there was the considerable consolation of subsequently winning the title in Paris.

Restoring a sense of national identity was actually a strong early component part of Stuart Lancaster’s reign as England coach, when Farrell and Mike Catt were his assistants. Aside from their return to Twickenham, subplots abound within Sunday’s game, not least the former coming up against a home team captained by his son Owen.

Farrell also worked with Eddie Jones at Saracens before the latter’s arrival as England head coach led to Farrell’s departure, and Jones subsequently admitted it was one of the hardest decisions he ever made.

“It’s nice for him to say that but, honestly, my honest opinion on that, I don’t think it was my job anyway, I don’t. I worked for Stuart. And Stuart had left and I would have done exactly the same if I was Eddie.”

Farrell then gave little thought to Jones asking him back as English defence coach last year.

“He asked the question and I had a good job anyway so that was that. No more than that.”

By that stage Farrell probably had a fair idea he would succeed Joe Schmidt, and the counter-offers of jobs elsewhere for his then assistants was one of the reasons Schmidt made known his decision to step down almost a year in advance.

Farrell also confirmed yesterday that he has sought out Schmidt’s advice during the course of this Six Nations “a few times”.

“He’s been to a few games, he’s watched the games and will be watching in a little bit more depth than other people so it’s always nice to get a bit of feedback.”

Farrell is clearly mindful of the need to bring a high level of emotional and physical intensity to the contact zone on Sunday, not least as England will bring plenty of the same in their first home game since humiliating Ireland last September.

“We know what type of game it is going to be, we know how England want to play. They play hard on the gainline, try to win quick ball, winning collisions, etc. We’ve seen them do that with great success over a number of years. So, we know what’s coming as far as that’s concerned. We want to turn up and express ourselves in that way as well.”

Furthermore, the fit-again Manu Tuilagi is likely to be restored. Tuilagi running onto Jamie George’s first long throw a year ago at the Aviva Stadium drew a line in the sand and led to Jonny May’s second-minute try, and in five games against Ireland, he’s been on the winning side every time.

“He’s obviously been instrumental as far as the way they want to play, he gets them over the gainline doesn’t he?” said Farrell. “Hitting Manu off the top of the lineout and playing both sides of that ruck is quite nice to flow on to. If he’s fit and 100pc I’m sure he’ll be in there.”

An irritating sideshow has been the critique from the Welsh scrum coach Jonathan Humphreys that Tadhg Furlong scrums at an angle illegally which, after 46 caps for Ireland and the Lions, was a new one.

“It is a bit strange singling out a guy that is probably known for being as legal as they get as far as scrummaging is concerned, and not just that, but top of the tree really as far as world rugby is concerned in that position,” said Farrell. “I’ve never known anyone say that about Tadhg before.”

In the squad’s welcoming set-up it transpires that the former Irish manager Mick Kearney has also been spending a couple of days at the start of each match week “mentoring” some of the players and staff, as much with advice for off-field career pursuits.

“He is a wise old man Mick,” said Farrell, “so we try to take advantage of that.”