Kings prove no match for Connacht 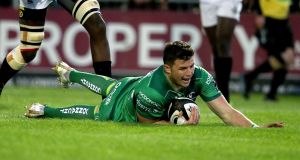 The feel-good factor continued in Galway on Saturday night when Connacht grabbed a deserved bonus-point victory over Southern Kings at the Sportsground.

When the All-Ireland winning Galway hurlers and the Liam MacCarthy Cup were introduced to the 5,174 crowd at half-time, Connacht were already in the driving seat in this first Guinness Pro14 contest against the South African visitors.

Connacht enjoyed a handy 24-5 lead, scoring the third of their first-half tries on the stroke of the whistle. Having dominated possession, they opened after 13 minutes, capitalising on a good touch-finder from right wing Darragh Leader.

The pack drove the hard yards before centre Tom Farrell broke through three tacklers to touch down, with Jack Carty adding the extras.

Connacht’s dominance of the scrum provided Carty with a chance to extend the lead after 25 minutes with a penalty, before the Kings opened their tally six minutes later through a well-worked try, finished by centre Berton Klaasen.

The home side’s riposte was swift as they forced their way up-field with Jarrad Butler and Farrell making incisive runs. From a ruck scrumhalf Kieran Marmion made a sniping break supplying the supporting Eoghan Masteron who finished under the posts. Carty converted before adding a third when Ultan Dillane drove over with the support of his pack.

The Kings started the second half showing some electric pace, keeping Connacht on their toes. Although Carty potted another three points, the visitors kept Connacht pinned inside their own half. After Connacht’s Finlay Bealham was yellow carded for a high tackle, replacement prop Luvuyo Pupuma looked to have scored before the TMO revealed him having lost possession on the line.

Connacht remained on the defensive until the final quarter, but from a rare incursion made it count when replacement outhalf Steve Crosbie opted for a long pass and Leader did well to stretch over the line for the bonus point try.

There was some consolation for the Kings when the unstoppable Pupuma made amends for his earlier knock-on, finishing with a try in the 77th minute.