Munster off to a flying start as they overwhelm Italian visitors 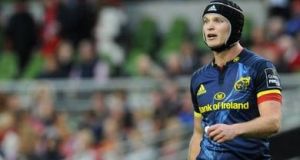 Tyler Bleyendaal: he dictated the pace of the game but he missed four of five conversions

Munster got the new season off to a flying start with a bonus point win in Cork on a night when they rarely had to stretch themselves to see off the disappointing challenge of the visitors.

The Treviso side, now renamed Benetton Rugby, had suggested a big improvement in their fortunes this season with the signing of the likes of New Zealander Marty Banks, but it could be another long losing campaign for the Italians if this is anything to go by.

Munster, having won all seven previous home clashes against them, had the points in the bag long before the break, and the only disappointment for Rassie Erasmus and his management team is that they did not push on for a bigger win after the restart.

Yet, with such an inexperienced side on duty, Erasmus will be pleased by the performances of emerging players such as Liam O’Connor, Ciaran Parker, Sean O’Connor and Fineen Wycherley, while new centre Chris Farrell posted a big display.And with Tyler Bleyendaal, even if he was poor off the tee, dictating matters, it was a long night for the Italians.

Munster had the bonus point in the bag after just over half an hour as the feeble Italian challenge was swept aside by a free-flowing home side who were on top in every sector.

Munster weren’t long in punishing them either and by the interval were coasting to victory on a 27-3 scoreline. It would have been much more had Bleyendaal been more accurate but he missed four of five conversions.

He landed the first of them with a superbly measured kick from the right after lock Jean Kleyn had got them off the mark after nine minutes with the opening try after a sustained bout of pressure.

The other four tries in the opening half came from the backs, with Duncan Williams popping the ball up beautifully for his half-back partner Bleyendaal to dive over after Tommy O’Donnell had been stopped short after another good attack.

Munster, with new centre Farrell crowning his competitive debut with some great surges, continued to dominate, and wrapped up the bonus point when first Darren Sweetnam and then Alex Wootton crossed for tries.

The presence of Ireland defence coach Andy Farrell, who had a brief stint with Munster, didn’t go unnoticed among supporters speculating that he may be a possible replacement when Erasmus departs in December.

Full-back Andrew Conway, full of endeavour from the start, was the next to slice the Italians when he jinked his way from deep to score a fine try as he continued the form which saw him score 11 last season.

Munster continued to build on that 27-3 advantage after the restart, and they crossed for a sixth try after 50 minutes when Kleyn bulldozed over after Italian international Francesco Minto was binned for killing the ball.

Munster introduced Mike Sherry for his first competitive action since May 2016, and the hooker will be glad to get game time after recovering from a troublesome back injury.

Both sides emptied their benches in the second half and the game became more disjointed.Munster will be disappointed not to have pushed on and posted a much bigger score.

1 Frustration for Lowry and McIlroy as Li leads at US PGA
2 Michael Walker: Pressure mounts on Barcelona to stop slide
3 Wolves found in breach of financial fair play rules by Uefa
4 Sporting Cathedrals: Semple Stadium, the very centre of the hurling universe
5 War and romance behind 147 unbroken years of the Nationals
Real news has value SUBSCRIBE

Frustration for Lowry and McIlroy as Li leads at US PGA 09:14
Michael Walker: Pressure mounts on Barcelona to stop slide 08:00
Tokyo ’64 Revisited: lifelong tales of Olympic experience 06:00
Sporting Cathedrals: Semple Stadium, the very centre of the hurling universe 06:00
Rubber about to meet the road as counties weigh up financial hit 06:00
Here is your handy guide to sport on television this week