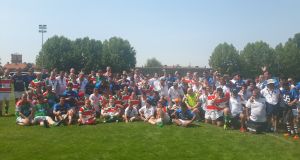 Sunday’s Well Rebels are not your ordinary rugby team. In fact, they are quite extraordinary. You see, they are a mixed rugby team, the only team of its kind in Ireland. The Women’s Rugby World Cup rightly dominated coverage, but, deep in the heart of the Basque region in Spain, Ireland’s only mixed ability rugby team defended their world title in the now bi-annual World Cup Tournament held by International Mixed Ability Sports (IMAS) under the model they like to call Mixed Ability.

The Mixed Ability Model, according to the IMAS website, is different from the normal Paralympic structure. Mixed ability sports starts from the idea that anyone, at any point in life, can experience a form of disability. Mixed ability sport is not about classifying levels of ability and separating disabled players into different tiers.

Sunday’s Well Rebels won the inaugural tournament in Bradford, UK back in 2015 and the tournament was seen as not just a celebration of disability and ability, it encouraged athletes to work with others who weren’t disabled – they just had mixed ability. The team came about after Alan Craughwell, who is a manager at COPE foundation, put forward the idea to Sunday’s Well RFC. The proposal was a success, and since 2014, the Irish team has benefitted not only participants but families and anyone who knew a person with a disability.

This year’s tournament was held in the Basque region of Spain, in the capital, Vitoria-Gasteiz, and the aim this year was to not only enhance the interaction and participation of all abilities, the tournament intended to build new connections between sport clubs, schools, universities and colleges, communities and local authorities; promote and advertise the core values associated with rugby: integrity, passion, solidarity, discipline and respect; and contribute to furthering a sustainable model of national and international sport events for diverse capacities. Of course, the overall aim was to try and eradicate the word “disability” and prove to everyone that no matter what your abilities are, you too can achieve whatever you want in life.

Great game had by all . Well done Pumas pic.twitter.com/tpJEBQZtDI

The participating teams ranged from many areas. In total 16 teams participated, all trying to overthrow Sunday’s Well Rebels as champions. International Mixed Ability Sports expected roughly 400 spectators, and World Rugby legislation was the one to be followed, with the exception of uncontested scrums. Also included in the rules changes were rolling substitutes to facilitate the players and make it safe – although full contact is expected.

The final was a contest by all means, and Sunday’s Well Rebels, as the manager said, can feel very proud of what they achieved. The Rebels and Selección Argentina de Mixed Ability Rugby (Rugby Inclusivo) emerged with the Rebels wearing their traditional green, white and red strip. Argentina wore blue and white, a nod to their home country. This game was huge and, after standing together for photos (proud mammies and families out in force) abd the sportsman’s handshake, the players were ready for their biggest game.

Unfortunately, the Irish contingent lost out, but players and coaches still had smiles on their faces. Medals were handed to both teams, with the Argentinian team lifting that elusive trophy. “Campeones! Campeones!” they cheered, but really, everyone was a winner here in the Basque. Bradford Bumble Bees were awarded for keeping the spirit of mixed rugby alive and team favourite Big Lee was awarded Player of the Tournament. As the final whistle blows, a huge roar and celebrations from players, fans and coaches. The final score was divided into two: tournament score and spirit score. Selección Argentina lift the trophy high into the sky. A man with bagpipes enters the fray to provide entertainment, players, families, coaches and everyone singing and clapping along, all having a good time.

But, like all sporting organisations, what next for mixed abilities rugby? With two successful world tournaments completed successfully, with two separate and sporting winners, and with sheer joy spread among the competition area, mixed abilities rugby looks to be on the up. The delegations of Hong Kong, USA, Colombia, Serbia, Mexico, Canada, France and Spain have expressed interest in participating in the tournament, while research has consistently proven the benefits of including all in sport.

When the dust has settled on a fantastic tournament, we can all agree on one thing: not only have the players and families done themselves proud, the end result in a way doesn’t matter. The tournament and Sunday’s Well Rebels are successful in tackling notions that if you are disabled, you must be housebound and heavily reliant on others. This team, sport and tournament has not only tackled these limitations, but they have inspired many people, regardless of ability, to be proud of who you are and that you can achieve whatever you want in life.