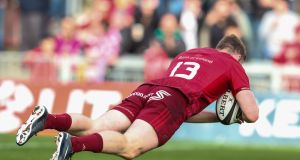 Director of rugby Rassie Erasmus has tipped Alex Wootton for a great campaign after the 23-year old went on a scoring rampage as Munster secured another impressive bonus point win against Cheetahs in the Pro14.

Munster did not concede a try and scored six against Benetton Rugby in the opening weekend and Erasmus’ side accounted for eight more tries on Saturday in their first clash against a South African club outfit.

Wootton scored four tries in all, and the Macclesfield native has now scored five tries in his first two games for Munster this season. He is only the second Munster player to score four tries in a game in this competition, with Mike Mullins first achieving that against Caerphilly in 2001.

Prior to this campaign he had only scored twice in his eight Munster appearances, but Erasmus was thrilled with what he saw from the Ireland Sevens star.

“There are a few guys like Fineen Wycherley, Sean O’Connor with the second full 80 minutes that he has played, Liam O’Connor. Guys competing with international guys and putting up their hands, James Hart getting a nice run,” said Erasmus.

“It’s positive, and then there is still Keith Earls that most come back, Simon Zebo was on the bench. Munster is building a nice squad and there is healthy competition.

“We are a bit thin at secondrow at this stage which is unfortunate with all of the injuries we have had but yes it’s great when young guys take the opportunities.

“A part from the tries, the other things Alex did, his tackling and working with the back-three together. His work-rate was awesome. And the beautiful tries he scored.

“He’s physical, he’s got outright pace, maybe aerially he’s not as good as Darren Sweetnam, Andrew Conway and Earls but he’ll get there and he’s working hard.

“He’ll get found out on his weaker points as he goes on but the way he works, Earls and Zebo are helping him, and he’s got a bright future. It’s up to him to make sure he develops with every game and we are trying to help him to do that.”

Erasmus formerly played with and coached the Cheetahs and they offered some resistance with tries from William Small-Smith and Henco Venter either side of the second-half, but they were well and truly over-powered.

Ulster had done likewise in round one when they scored six tries against Cheetahs but Erasmus believes they just need time to find their feet and that Leinster won’t have it easy in Bloemfontein later this month.

“Leinster will have a tough game there. You play at altitude and after 30 minutes it feels like you’re not fit. It’s a different thing,” said Erasmus.

“And it’s like that for them coming here – it’s raining in the warm-up and sunshine when they are playing. Even their coaches were wearing suits. It’s things you will have to get used to with the land and there is things when you land (at altitude) where your nose starts bleeding and you have to handle things like that.

“The Kings are a different story and they might take a little longer but the Cheetahs will be competitive. I am not just saying that because I am from there.”

Cheetahs are bottom of Conference A after two games but Munster top the table ahead of their round three trip to Ospreys.

“It’s nice when things are working. Cheetahs are not soft in the defence but their system is more thrusting defence which makes it easier to get yards. Next week you face a team that presses really hard and put you under pressure,” said Erasmus.

“It worked for us for the first two weeks but we will focus on next week and the challenges that will have. But I would be lying if I said I’m not happy with the way we are attacking and defending.”