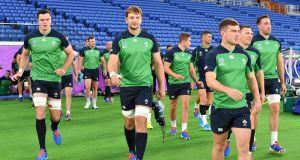 October 18th, 2015. A wounded Ireland are put to the sword by a dashing Argentina side, full of vim and vigour, under the Millennium Stadium roof.

Los Pumas run out handsome 43-20 winners in Cardiff. For Ireland, their Rugby World Cup dream is over once again.

Nearly four years have flown by since that chastening afternoon in the Welsh capital, and for Irish rugby they have been pretty golden ones.

During the last World Cup cycle Joe Schmidt’s side have won two Six Nations Championships, a Grand Slam in 2018, they have beaten the All Blacks twice and won a series in Australia - as well as recently moving to the top of the world rankings.

But now they stand at the foot of their Everest again - another Rugby World Cup, another chance to make it into an unprecedented, historic semi-final.

Ireland have travelled across the globe to Japan to be faced with very familiar foes - Gregor Townsend’s Scotland are their first opponents.

It is a fixture which will shape the journey of both nations this autumn. There is no time for a slow start, very little room for error.

It’s a Celtic clash with an East Asian twist - here is everything you need to know as Ireland’s Rugby World Cup campaign begins in earnest.

Ireland’s opening Pool A fixture of the 2019 Rugby World Cup, against Scotland at the Yokohama International Stadium.

The game kicks off at 8.45am Irish time. Japan is eight hours ahead Ireland, meaning it’s a 4.45pm kick-off local time.

The time difference means this is a tournament to be enjoyed over breakfast - liquid or otherwise. Ireland’s opener will be broadcast live on RTÉ2 (coverage 8am) and Eir Sport (8.15am), as well as on ITV (8.15am).

You will also be able to follow all of the action via the Irish Times liveblog, which will be running from around 8am on Sunday morning.

Mary Hannigan has put together an excellent guide on when and where the Rugby World Cup is being televised, with viewers in for a pretty gruelling few weeks. You can read that HERE.

The battle for Pool A?

Sunday’s fixture might be the first action for either side but it already has the feel of a straight shootout to be crowned winners of Pool A, with hosts Japan, Samoa and Russia the other sides grouped with Ireland and Scotland.

For Ireland, the fixture list has been relatively kind, however Scotland’s pool campaign will be bookended by their two trickiest assignments. . .

Finishing top of Pool A won’t neccessarily come as an advantage for Ireland or Scotland, with the winners set to face the runners up in Pool B in the quarter-finals - which will almost certainly mean facing the All Blacks or the Springboks.

New Zealand and South Africa meet on Saturday morning, meaning both Ireland and Scotland will know their likely last-eight opponents should they win on Sunday (providing, that is, they don’t slip up elsewhere).

Joe Schmidt named his Ireland side on Friday, and there were three glaring absentees - Rob Kearney, Keith Earls and Joey Carbery. The Kiwi gave a positive update on the fitness of all three, but said they were taking the conservative approach and keeping all three on ice for the second match against Japan.

As a result Ireland field a relatively inexperienced - albeit hugely exciting - back three against the Scots, with Jordan Larmout starting at fullback in between Andrew Conway and Jacob Stockdale on the wings.

Gregor Townsend has opted for experience in Yokohama, with Scotland’s starting XV boasting 630 caps. Stuart McInally captains the side from hooker with Greig Laidlaw and John Barclay - previous skippers and current vice captains - also starting at scrumhalf and in the backrow respectively.

As always, the flying Scots have plenty of flair at their disposal - key men Stuart Hogg and Finn Russell also start.

More importantly, Ireland have won 18 out of 24 meetings since the turn of the Millennium - including a 22-13 win at Murrayfield in this year’s Six Nations.

Ireland have forever been unable to break through the glass ceiling of the quarter-finals, reaching the last-eight six times in eight tournaments but never making it to the holy grail of the last four.

Scotland however have made it to the semi-finals once, in 1991, where they lost 9-6 to England at Murrayfield - Gavin Hastings’ missed penaly proving crucial.

Sunday’s match might be a pool fixture, and defeat wouldn’t be curtains for either side, but it already feels like knockout rugby.

As Gordon D’Arcy wrote in his column this week: “We were Scotland once upon a time. Leinster from 1998 to about 2008 could beat any team when the mood took us. We were also susceptible to an Italian club side turning us over. We never knew which team would turn up. We honestly didn’t know sitting in the changing room if we would play beautiful rugby or get walloped.

“That is Scotland in 2019; shut down Finn Russell, Hogg and Kingholm and Pool A becomes about their final outing against Japan.

“The beautiful game never prevails in places like Welford Road or Thomond Park. Yokohama on Sunday is cup rugby and cup rugby is about squeezing the life out of your opponent.”

A familiar face is in charge on Sunday - England’s Wayne Barnes is the match referee.

Wet, wet, wet. Yokohama has been hit by heavy rain this week, with more predicted on Sunday - enough to inspire Scotland to practice with balls covered in shampoo in a bid to try and replicate tricky handling conditions. There were fears the rain might be so severe it could prevent the game from going ahead - but as it stands we’re good to go.

In Joe we trust!