Gerry Thornley’s preview: All Blacks remain the team to beat but they’re not invincible 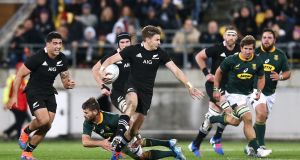 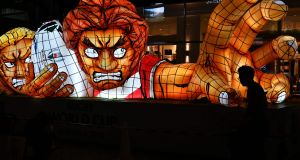 A pedestrian walks by an advertising installation for the Japan 2019 Rugby World Cup in Oita on the eve of the start of the tournament. Photo: Gabriel Bouys/Getty Images

Finally, the actual rugby. On the eve of the long-awaited ninth edition of the Rugby World Cup, the tournament breaks new ground in Asia and like never before uncertainty reigns.

The constantly changing, unpredictable and unsettled weather seems entirely apt. The participants have been preparing accordingly. In addition to warm weather camps, Scotland and Wales have applied baby oil and shampoo respectively to make the pill every bit as slippery as it might turn out to be. Then there’s the dark cloud of World Rugby’s clampdown on high hits, and the genuine fear among head coaches throughout as to the possibility of a match or an entire team’s campaign being decisively affected as a result.

Meanwhile, the first back-to-back champions, the almighty All Blacks, are the first to admit that this is the most open World Cup yet.

Their response to that record defeat by the Wallabies was mighty a week later, and they needed that restorative thrashing to revive confidence as well as to retain the Bledisloe Cup. Eve-of-tournament jolts served them well in 2011 and 2015.

But that was a one-off, highly charged revenge mission while wounded in their Eden Park fortress. In stark contrast, there remain all manner of relatively new combinations throughout their team, such as switching the brilliant Beauden Barrett to accommodate Richie Mo’unga and their dual playmaker system.

Furthermore rarely, in fact never, has a World Cup begun with such a bang, with their meeting against old enemies South Africa one of three potential pool deciders on the opening weekend.

Steve Hansen has made the point that losing an opening match need not necessarily be the end of a country’s ambitions to lift the Webb Ellis Cup, and cited the example of France after losing two pool matches, against New Zealand and Tonga, en route to making the final.

However that was an exception and, well, that was France. If ever a team was to lose on the opening weekend and go all the way, it would most likely be the losers of this heavyweight southern hemisphere collision.

South Africa are many knowledgeable pundit’s idea of prospective world champions for a third time. Despite retaining a strong core of the tem that had been malfunctioning for the previous two years, Rassie Erasmus has restored organistion, togetherness and belief.

They probably needed to win the Rugby Championship more than New Zealand, and some of their performances along the way, particularly their rout of the Pumas in Argentina, showed that when they get their power game going, they are hard to stop for any team.

Ireland are ranked number one in the world and while that’s been rightly played down by Joe Schmidt, that’s still encouraging. Whisper it quietly but since the rankings were introduced, three of the past four winners went into the tournament in the number one slot.

After that Twickenham mauling, the wins over Wales were also restorative for them, and allowing for the spate of soft tissue injuries, in the endgame against Wales two weeks ago they looked like a squad whose fitness is coming to the boil.

They have world-class operators in Tadhg Furlong, James Ryan, Conor Murray and Johnny Sexton, plenty of quality around them, a smart coaching ticket and improved strength in depth. Admittedly, a prospective quarter-final meeting with New Zealand or South Africa is as tough a draw as possible.

The opening game against Scotland looks potentially defining. But were they to generate early momentum by winning that one, unlike four years ago, the schedule should also allow them to peak again come the knockout stages. And were all the key men fit, they are more than capable of a huge one-off performance and victory in the quarter-finals.

For England, Eddie Jones’ knowledge of all things Japanese could see them go all the way for a second time, and certainly if Mako and Billy Vunipola and Manu Tuilagi stay fit, they have the firepower to penetrate any defence, as well as the exceptional force of nature as much as a footballing talent that is Owen Farrell. As a change-up, George Ford looks in the form of his life, and they have finishers aplenty.

Reservations come with the draw, as their pool deciders against Argentina and France, meaning they will probably have to win five mammoth matches in a row. Furthermore, in the prevailing climate, their discipline could be an issue, for they have a number of players one could envisage falling foul of the officials.

France, desultory for so much of the last four years, are many people’s idea of potentially the biggest casualty. But this is the one time every four years when their national management oversee their pre-season without interference from their clubs. Physically they looked in prime nick in the warm-ups.

They’ve also new input form Fabien Galthie, are bristling with an amalgam of power up front fused with dancing backs, mostly from the rejuvenated Toulouse and the rangy Damien Penaud out wide while they could have one of the players of the tournament in Antoine Dupont.

Furthermore, if they beat Argentina in their opening game, they’ll have momentum come le crunch on the final weekend of pool games, and once the weather settles les bleus may well find the sun, heat and pristine surfaces to their liking. Besides, if ever a format which allows for a defeat in the pool stages suits one team, it is France.

They could surprise, all the more so as Argentina may well be suffering from the Jaguares’ energy-sapping campaign in reaching a first ever Super Rugby final. Much depends on Hugo Sanchez’s ability to revive them, although he looked a little out of sorts in the Rugby Championship. Mario Ledesma doesn’t seem to have the players to sort out their scrum, and many of their Jaguares players simply looked weary in the Rugby Champiionship.

Wales have lost Toby Faletau and Gareth Anscombe, two huge figures for them and now, of course, their assistant-cum-backs coach Rob Howley. But it’s worth noting that they won the Grand Slam more or less without Faletau and as for the undoubted upheaval caused by losing Howley, who had been a permanent feature of their coaching ticket during Warren Gatland’s dozen years at the helm, Stephen Jones has a working knowledge of most of the squad and will bring some fresh impetus.

Most of all, as demonstrated by Wales winning the Grand Slam to the backdrop of the botched merger between the Ospreys and the Scarlets, if any head coach, back-up staff and group of players can circle the wagons, it is them. Wales remain contenders, and will have a big say in the knockout stages.

Similarly, the Wallabies have regrouped after the Israel Folau imbroglio, and Michael Cheika’s ability to bring them perfectly pitched for a World Cup was demonstrated a year ago.

Faced by the latter two, Fiji look the pick of the Pacific Islands to trouble the bigger countries, although Samoa showed against Australia they may also be coming together better than was expected.

There’ll be a few good ones in the course of the next 48 matches. It’s more open than ever before. The All Blacks have come back to the back, and the peleton have closed the ground on them. But they’re still the team to beat.