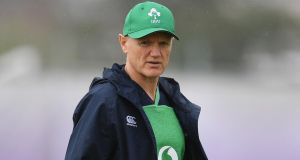 Still no Joey Carbery - alongside varying degrees of injuries to Keith Earls, Rob Kearney and Robbie Henshaw - compelled Ireland coach Joe Schmidt to explain just how close the Munster outhalf is to being available for selection.

“You’ll see Joey will run fully in the warm-up as a reserve back,” said Schmidt 48 hours out from the opening World Cup Pool A game against Scotland.

“Keith Earls was the sharpest player at training on Wednesday. He was certainly the quickest. He was very, very sharp. Rob Kearney trained well as well.”

After such a positive fitness report it may seem odd that these regulars in the Irish squad are not going to feature on Sunday in Yokohama, but Schmidt explained: “We were getting really tight for time. The best continuity that we had was to have the guys who trained through the time we have been here. That’s what we went with. It’s exciting to have the back three that we have got.”

This undoubtedly exciting back three of Jordan Larmour, named at fullback, with Andrew Conway and Jacob Stockdale on the wings is equally inexperienced.

Stockdale, despite being 23, is the most experienced of the trio at international level with 21 starts (and and astonishing 16 tries).

Conway’s career has been hampered by injury with the 28-year-old only having nine starts for Ireland, and six tries, seven on the wing.

Larmour returns to fullback having started two warm-up games in August on the right wing. He has only worn number 15 for Ireland on two previous occasions but that included a sensational hat-trick against Italy last season in Chicago.

“Andrew has proven he has real aerial ability and that will be really useful for us,” said Schmidt. “I still have the vision in my mind, clearly, of Jordan Larmour beating Israel Folau to a ball in the third Test in Sydney on that Australian tour in the middle of last year.

“They are all feeding off each other, young men who are really keen to impress.”

Scotland, via the kicking games of Greg Laidlaw, Finn Russell and Stuart Hogg will seek to target them relentlessly, knowing full well that Ireland have been exposed whenever Kearney does not play.

On other selections, namely Tadhg Beirne making the bench ahead of Jean Kleyn, Schmidt said: “Iain Henderson has almost got 50 caps. He was involved in the big games at the last World Cup last time and to have that experience is really important, particularly in the first game out.

“Jean Kleyn, I have no doubt, he will feature in some really important games for us. Tadhg Beirne coming off the bench has the ability to change the game up. We have also got Jack Conan on the bench as well but Tadhg puts really great pressure on the ball and he has a little bit more time with us than Jean.”

“We need the right people coming off the bench doing the right job.”