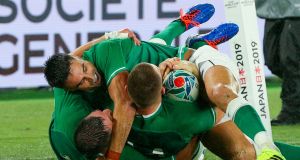 This was the real Ireland again, although they never really went away, they just went a little awry. Back to their best impression of a well-oiled machine, this was a dominant, leading-from-the-front performance that, if they just stay reasonably healthy, strongly suggests they can have a big say in the 2019 World Cup.

Everyone was sharp and utterly assured of their roles, whether starting or off the bench. There wasn’t an average performance to be had. There was not one weak link in the chain.

The bedrocks were the set-pieces, with a 100 per cent return from 10 scrums and a dozen lineouts, and not only did the maul yield a try but their defensive maul kept the Scots at bay.

There was variation in the lineouts too, Rory Best going to the tail early on before dancing down the blindside with eye-catching footwork and offloading to Conor Murray. This ultimately led to the first try, Andrew Conway fielding Greig Laidlaw’s box kick and offloading to Jordan Larmour. Two phases later Iain Henderson left Stuart McInally and Grant Gilchrist in his wake, and a few recycles later James Ryan burrowed over and, roared on by a sizeable advance contingent of the Blarney Army, Ireland were away.

For all Finn Russell’s inventiveness and the pace of the Scots’ outside three, especially Stuart Hogg, they kept the Scots under wraps and restricted them to three points, and this was both in the dry first half and sodden second period.

Ireland made 13 line breaks and, one senses, kept plenty up their sleeves in doing so. As well as the locks, CJ Stander had a huge game, and the reshuffled back three not only answered all the questions that were asked of them, Conway and Larmour added a counterattacking spark too.

They also restricted Scotland to just three line breaks and five offloads, missing only eight tackles. Any time Stuart Hogg, Tommy Seymour or Sean Maitland threatened, they were corralled, regardless of the jersey. Typifying their performances, it was Ryan who prevented Maitland from breaking clear, and on another occasion it was Henderson who tracked down Hogg.

It wasn’t just the stats, Ireland ramped up their defensive line speed to reduce Russell’s time on the ball and reduce his options, knowing full well that everything goes through him – or at any rate did until Ali Price came on. By which point the game was up for Scotland.

“We didn’t get it right all the time,” said Joe Schmidt afterwards. “I think early on when Bundee kind of knocked himself, we didn’t quite close that down and we had to scramble into the corner.”

“But I was really happy that we got them to the corners and then got off the line in the middle of the pitch. That meant they didn’t have front-foot ball in the middle of the pitch where they love to play the angles in behind you or either side of the ruck. Finn Russell sits on the axis in behind the ruck and sweeps either side and he’s very hard to shut down because he comes into the line late.

“I was delighted with the defensive performance. I mentioned earlier some of the defence of the back three, Jacob Stockdale in particular getting Stuart Hogg. Garry Ringrose, the very first time they tried to go wide, he went on the line and got Stuart Hogg out behind the line. Bundee got a turnover. I was delighted with those aspects of our play.”

Indeed, the Aki-Ringrose combination worked a charm, and the midfield remained supreme after Chris Farrell came in. The statistics will also show Ringrose missed a couple of tackles. Lies, damned lies, and statistics. Those two misses actually shut the door on promising Scottish attacks.

Conway and Larmour had more scope to attack, albeit Stockdale had one of his trademark chip and gathers, but he also made a couple of excellent reads in defence.

“Yeah, it was good to get a couple of good reads and make a few shots, but there’s a lot more to the game than making a few tackles,” said Stockdale. “Whenever I’ve done well in attack and not so well in defence, it’s the same the other way around.”

Stockdale will have his hands full if he’s marking Kotaro Matsushima, Japan’s hat-trick hero in the opening night win over Russia, but having watched the All Blacks-South Africa free-running jamboree on Saturday, Stockdale couldn’t but be struck by Cheslin Kolbe’s footwork and acceleration.

“Obviously New Zealand and South Africa are two of the giants of world rugby and them going at each other in a pretty good game was pretty interesting to watch. I thought Cheslin Kolbe was phenomenal. He’s a serious wee jack-in-the-box. He’ll be one I need to look out for.”

Ireland’s defence also effectively earned their third try. It was Farrell’s line speed and hit on Russell which led to Seymour missing the pass and Conway leading a footrush upfield and, helped by a fortuitous bounce off the post’s padding, nabbed Hogg behind the try-line. Stander’s burst off the base was something and Tadhg Furlong muscled over.

The Irish think-tank had done their homework, and they’d exploited the narrow side to good effect with that earlier ploy, as well as a couple with Stockdale before Murray and the Conway-Larmour combination sealed the bonus point.

Conway chased and won another towering up-and-under from Murray for the ever alert Larmour to dance into traffic as he does, before Murray had the vision to pick out Conway for a fine blindside finish.