Rugby World Cup TV View: Ireland find their game-flow as Jamie and Eddie get it on 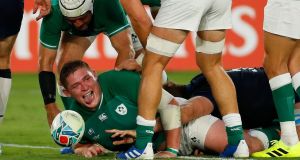 Ireland’s prop Tadhg Furlong reacts after scoring a try during the Japan 2019 Rugby World Cup Pool A match between Ireland and Scotland at the International Stadium Yokohama in Yokohama on September 22, 2019. Photograph: Odd Andersen/AFP/Getty Images

There was a timely reminder from Eir Sport’s panel that we shouldn’t be losing the run of ourselves, that that performance in Yokohama doesn’t actually guarantee that Ireland will go on to win the World Cup, as many of us now assume.

Peter Stringer, for example, recalled a bright opening to the 2003 tournament, but in the end the only memory he savoured from the trip to Australia was “hanging out with Alf Stewart on the Home and Away set”.

We can’t, then, be leering lustily at the Webb Ellis trophy after one pool game and crooning ‘you know we belong together . . .’ in its ear. We must never forget our often bitter World Cup learnings – and lest we had, RTÉ reminded us of them with a montage set to a tune called ‘Toxic’.

Restraint, then, is needed at a time like this.

But gawd, that was a mighty start.

Or as Jamie Heaslip put it at half-time, “all those reps are paying off, they’re in a state of group-flow there!”

“In a state of what,” asked Daire O’Brien who, like ourselves, thought Jamie was speaking Japanese.

He didn’t actually explain what it meant, but you had to take it that it was a good thing because Ireland were leading 19-3 at the break, scoring three tries to boot.

Indeed, Hugh Cahill was so excited about Ireland’s start to the game he turned in to Eddie Butler, although, as it proved, this was because RTÉ were having technical difficulties, Hugh and Donal Lenihan sounding like they were speaking from inside a toilet. Eddie’s commentary, then, came off the bench until the issue was resolved.

That, really, was the morning’s only glitch, Daire having welcomed us from an RTÉ set that solves the mystery of the whereabouts of the one used in Millstreet for the 1993 Eurovision Song Contest.

Mood? Two thirds upbeat. While fretting a touch about Scotland, Jamie and Stephen Ferris were, on the whole, super confident, so Eddie O’Sullivan got to work. “What could go wrong today? Well . . .”

The list was quite lengthy too, his chief concerns being Scotland’s ability to “put all their eggs in the basket on the day” and them having a coach “who throws the kitchen sink at you”. And he was still up the walls about Jordan Larmour at fullback. “There are a lot of chips on the table today,” he concluded.

So, Jamie began listing all the reasons why we’re brilliant.

Jamie: “I think on paper we’re the better team and we should win this game.” Eddie: “ . . . But Scotland are the kings of the ambush.” Jamie: [Christ almighty].

Meanwhile, ITV had put Paul O’Connell in the corner of their studio that has been turned in to a Japanese living room and got him to demonstrate, with the assistance of a group of random rugby players hired for the day, how lineouts work, Paul doing so in his socks out of respect to Japanese culture. Ours is not to reason why.

Match time. And hardly had we finished our breakfast rolls when James Ryan went over and Johnny Sexton, staring at the posts with all the intensity of a man choosing his sandwich filling, converted. By the time Typhoon Tadhg got his try you’d have been half wondering if you were still in bed dreaming.

Craig Doyle: “What have Scotland got to do?” Jim Hamilton: “A lot.”

But Ireland didn’t even let them do a little, Donal even confusing them with Galway at one point, so unfamiliar was he with the code of football they were playing. Full-time, 27-3, lovely jubbly.

“You officially ended this game as Ireland’s oldest ever World Cup member, so go and get your slippers on,” said our interviewer to Rory Best. All he needed to add was ‘we’re just getting word your puppy back in Armagh has been run over by a milk float’ to remove 100 per cent of the joy from the moment. At least Tadhg was more respectful. “Old Man Best doing 80 minutes . . . it’s a testament to him at 55 years of age.”

Back in the studio Jamie was sitting there with a big smiley head on him while Stephen, without naming any names, noted that “there’s been a lot of negativity the last few weeks . . . the back three that we had all these concerns about? Superb!”

There were no buts from Eddie this time. Kidding. “But they weren’t put under any pressure.”

Jamie: “Eddie, you were calling Jordan out, saying he’s not good in the air – and he took all the high balls absolutely no problem!”

Eddie: “I didn’t call him out! He was under zero pressure back there because we were so dominant!”

Daire: “I think a row is about to start here.”

But if the panel wasn’t in a state of group-flow, at least Ireland were. You’d even be half thinking Webb and us belong together.