Ireland put aside their stuttering 2019 form with a clinical 27-3 victory over their main Pool A rivals Scotland to open their World Cup campaign in convincing style. Video: Reuters 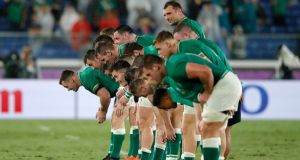 All of the doubts and all of the fears just evaporated in the warm rain of Yokohama as Ireland got back to what they have done supremely throughout the Joe Schmidt era.

They imposed their game plan. They overpowered and smothered the opposition. They left Scotland looking mentally drained after just half an hour of a World Cup adventure of which they had made big promises.

When it ended, after a fractured and soaked second half, the scoreboard read 27-3, the rain still fell hard and the Irish team once again resembled that team who habitually show up and take care of business.

In the stands, the fans sang the familiar Athenry anthem. Twickenham is 6,000 miles away and autumnal now and it seemed, as they took a bow before the stadium, as if the Irish left that bruising defeat against England long behind them as they sent out a signal of intent across the country.

“We knew we had a lot more to give and we just weren’t getting it for whatever reason,” said a tired and contented Rory Best, thinking back to that miserable hour in late August.

“I think sometimes you need to draw a bit of a line in the sand. We were more disappointed than anyone in Ireland or the world with that England performance. There are always going to be critics and probably the constructive criticism we get from Joe and the coaches is tougher than anything. And that’s how you learn to get better.”

We can only guess at the purges and intense analysis that Schmidt has put his squad through since that dismaying afternoon.

Certainly, Best was a different figure from the ashen veteran who left the field that day in London. Here in Yokohama, he was assured and direct and still seeking out tackles in the 80th minute of what was a stop-start gruelling encounter on a warm, slippery evening.

Ireland had a perfect return on their lineout, with Best finding green hands with all 12 throws. It was a night dominated by Ireland’s power plays. Iain Henderson set the tone, bursting through the flimsy cover of Stuart McInally and Grant Gilchrist and deep into Scotland’s 22, a surge which ended with James Ryan crashing over the line in the sixth minute.

Three times Ireland visited the Scottish 22 and three times they scored. CJ Stander, too, bludgeoned through the blue cover to make vital metres all afternoon and Jack Conan equalled Ryan’s game-high tackle count after coming in as a replacement. With Jordan Larmour both assured and exciting at fullback and Andrew Conway adding a splash of stardust to the night with the bonus-point try, it was about perfect.

“I was delighted with all 23,” Schmidt said of is players. “I think what sometimes can happen is you build a lead and then lose cohesion when guys filter in and out. I don’t think that really happened.

“The scrum that we turned over with the replacements was really impressive. I know Bestie was in the middle of that but he had a couple of new partners on either side of him in Andrew Porter and Dave Kilcoyne so that was really pleasing. But also: just that front foot we got off to. It takes a bit of pressure off and it meant Scotland had to take a few risks and chase the game. At the same time I was happy with the number or risks we did take.”

The only cloud in the evening was the sight of Bundee Aki and Peter O’Mahony leaving the field with head injuries and not returning. Johnny Sexton, too, retired early and even if the night was long won by then, he had delegated the place-kicking duties to Conor Murray.

It was a niggling reminder of just how intricately Ireland’s aspirations are wound around the Sexton’s health. There was no doubt that the Springboks scouts scattered around the stadium will have taken careful note of those injuries and vulnerabilities as they build up for what is mapped to be a monstrously physical confrontation in the quarter-final.

“I think those physical demands are right up there,” Schmidt admitted when asked to turn his thoughts to that likely confrontation against South Africa.

“I thought it was a heavyweight contest [on Saturday night]. It was a super game. South Africa were bristling and the All Blacks at times were brilliant. It’s a very different situation from last time in the World Cup when we were trying to build a lot through the pool. We may be able to manage the squad you might think but watching Japan, they are a dangerous team. We won’t be talking too much about South Africa.”

But you can bet he will be thinking about them, day and night.