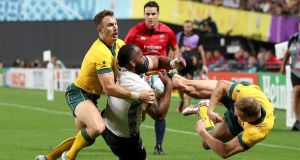 Fiji’s Peceli Yato is felled by Australian Reece Hodge’s (right) high body check. Yato could not return to play and Fiji lost their best player. Hodge went on to score when he should not have been on the pitch. Photo: Shaun Botterill/Getty Images

Having hoped for an auspicious start, it’ll be back to the drawing board for the match officials at this Rugby World Cup.

The games abounded with space closed down by offside at the breakdown, side entry, foul play and a few Television Match Officials went missing in action.

The last two are linked and, given the high emphasis on the high tackle sanction framework, there are serious questions to be asked and answered.

The TMOs are not shy about their importance – and they are important. But they’ll need to look seriously in the mirror after this weekend.

In Japan’s win over Russia, the Russian scrumhalf went down after he had played the ball. It was difficult for the on-field officials to see exactly what had happened as there was a lot of player traffic. But it was unacceptable that TMO Ben Skeen did not call the incident and advise the referee accordingly. For everybody who saw the replay it was clear foul play, the only question being the colour of the card.

Whatever the colour, Japan should have not been playing with 15 when they scored an important try eight minutes later just before half time.

In Australia’s win over Fiji, just around the 30-minute mark, the wonderful Pacelli Yato was felled by Australian Reece Hodge’s high body check. In this instance, the on-pitch officials seemed to have a view, but there were other tasks to hand. Again, the TMO Rowan Kitt failed to step up and the silence was deafening.

This offence has been described by Ross Tucker, one of the framework’s designers, as very clearly a red card offence. Yato could not return to play and Fiji lost their best player. Hodge went on to score when he should not have been on the pitch. And Australia should have been down to 14.

During South Africa’s defeat to New Zealand, a Springbok player was clotheslined as he came through to chase the scrumhalf. Again, no input from the TMO, Graham Hughes.

Side entry was frequent. A particular one to note is when Cian Healy side-entered on Scotland’s openside, Hamish Watson, who was seriously injured in the incident. Healy did look genuinely concerned and drew attention to the injury. Watson is now probably out of the tournament. I can imagine the outcry had that been the other way around.

France’s 23-21 win over Argentina was a thrilling, tense, encounter won by an O’Gara-esque pressurised drop goal from Camille Lopez. Unfortunately, we had hoped for much more from referee Angus Gardner. He was seemingly unaware of the French breaking the offside line, and – with the resulting impunity – this cut down space for Argentina. And where were the assistants? Certainly not offering any assistance!

On one occasion Picamoles was so far offside, the kickable penalty was easier to give than not, but it wasn’t given. In the second half, under massive pressure, France conceded a string of penalties but no sin-bin. It’s impossible not to feel sympathy for the Argentina coach, Mario Ledesma, who is livid.

Jerome Garces brings a lot to his matches, and in the South Africa v New Zealand game he was calm, clear and concise. The players were at ease with him. That is all to his credit. On the debit side, having started well, the breakdown gradually deteriorated with too many bodies on the ground, and our old friend ‘side entry’ made his usual appearance – including a beauty by Dan Coles with Jerome seemingly well placed to see it.

The scrums were sometimes difficult, and New Zealand seemed to “buy” at least one penalty in this phase of play.

It’s worth mentioning that Nigel Owens got the tournament off to a fine start for Team 21. It’s clear he’s lost none of his enthusiasm, and his fitness level looked as good as it was in 2015 when he reffed the final.

By a few lengths, to mix sporting metaphors, the most convincing performance was by Wayne Barnes. Extremely assured, organised, prepared and planned. Of course, he missed a few things but well within acceptable error margins. He also very nearly didn’t talk too much!

Despite a below par start, I am sure that Team 21 can, and will, press the restart button and produce performances which will meet their own high standards.