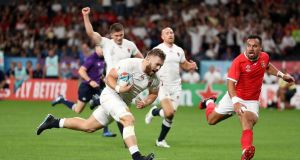 Manu Tuilagi put some much-needed gloss on a medicre opening display by England with his first World Cup tries for eight years as Eddie Jones’s side eased past Tonga 35-3 in their first Pool C fixture. The strong-running Tuilagi crossed twice within eight minutes in the first half but England were made to work unexpectedly hard for a try bonus point by their less well resourced Pacific Island opponents.

Fewer than four minutes remained when England finally scored their fourth try through Luke Cowan-Dickie after good work from his fellow replacement Jonathan Joseph. Earlier this month New Zealand stuck 92 points on Tonga in a warm-up game but England’s initial effort was rather more notable for its staccato rhythm and frequent handling errors, with the notable exception of Tuilagi’s powerful contribution.

It feels like half a lifetime since Tuilagi was being fished out of Auckland Harbour to put the ill-disciplined seal on England’s ill-fated 2011 campaign in New Zealand. More off-field misadventures and a catalogue of injuries meant this was his first World Cup game for eight years and his desire to make up for lost time was obvious.

Basing definitive World Cup forecasts on the evidence of England’s collective early form, however, remains a notoriously inexact science. It is 28 years ago since they last lost their opening pool game and, with respect to Jonathan Webb and Rob Andrew who were their only points-scorers in a 18-12 defeat by New Zealand at Twickenham, that is slightly too long ago to have any great relevance.

In the intervening period their tournament fortunes have been mixed to say the least and, assuming they get there, it will not be until the knockout stages commence next month that we shall really know how Eddie’s grand plan is coming together. What you can say is that when they run straight and hard, kick out of hand accurately and maintain their discipline they are a tough side to beat, regardless of the backdrop.

The last part of that trifecta was conspicuously missing here as England leaked more penalties in the opening 20 minutes than New Zealand conceded in their entire game against South Africa on Saturday night. The sight of Jones bashing his desk in irritation after Kyle Sinckler had conceded a dumb penalty for obstruction after Maro Itoje had gathered a totally innocuous restart was all the confirmation anyone needed that the management had been hoping for slightly better.

Some of the kicking was also mixed but, physicality wise, England are currently a reliable handful. Even Tonga, not exactly the frailest of opponents, struggled to contain the onrushing Tuilagi whose fearsome strength after taking a short ball from Ben Youngs down the blindside from a scrum also seemed to prompt the television match official to cover his eyes. Despite no clear and obvious evidence the try was duly awarded, apparently on the old school basis that it looked as though it should have been one.

His second try was rather more clear-cut, with England taking good, positive advantage of a hopeful kick aimed towards Anthony Watson. Although the Bath winger was collared the ball was swiftly recycled and the alert Elliot Daly released Jonny May into space on the left. May unselfishly found Tuilagi on his inside and Farrell’s conversion gave England a 15-3 cushion seven minutes before the interval.

There could have been another English try before half-time only for Ben Youngs to be held up over the line having taken a quick tap. It mattered little in terms of the outcome with two further Farrell penalties and a line-out drive score for Jamie George stretching England’s advantage prior to Cowan-Dickie’s late score . Jones, however, will be looking for a distinctly sharper all-round performance in their next match against the United States in Kobe on Thursday.