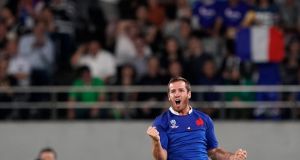 France begin their World Cup quest safe in the eternal knowledge that nothing about them is certain.

They possess all the elements to make another run to the final, with a scorched earth pair of centres Virimi Vakatawa and Gael Fickou bringing an intoxicating mix of power and guile that should quicken the pace of Romain Ntamack’s inevitable climb to superstardom.

Ntamack need not worry about an overly creative streak as scrumhalf Romain Dupont is already ensuring the hot steppers – Damian Penaud, Yoann Huget and an unageing Maxime Médard – will terrorise all the tournament bullies.

Two thrilling tries finished by Fickou and Dupont, along with four goal kicks from Ntamack, saw France storm into a 20-3 half-time lead.

The only score Les Blues could muster in the second half came from Camille Lopez’s snap drop goal on 69 minutes. The Clermont man saved his country from total collapse.

No matter. In Thomas Ramos, Maxime Machenaud and Lopez – the hero of this bitter, beautiful, ridiculous game – they possess alternative genius to make every other country jealous.

This should be a golden era for France’s devastatingly effective style of rugby. They have it all. Instead, they are desperate to escape a decade of acute embarrassment that saw their national team fall behind the leading nations mainly due to a domestic competition that plunders talent from everywhere else on the planet (especially the Pacific Islands – Vakatawa being on the long list of Fijians threatening to light up the coming weeks).

The 2020s promise world domination, once Demba Bamba and Ntamack are joined by their fellow under-20 champions, but Saturday provided a glimpse into the dream that could be World Cup 2023.

Then half-time arrived and the real France reappeared, lacking conditioning and defensive structure to trouble any serious team.

Argentina must narrow their sights to October 5th, when they face England back at Tokyo Stadium, or their World Cup aspirations will be wiped out at the Pool stages.

Already, they are precisely where coach Mario Ledesma wants them; bitter, angry and blaming everyone else, especially Australian referee Angus Gardner.

“I don’t know the penalty count [13-5 in their favour] but the ref told them [France] several times that the next one would be a yellow card,” said Ledesma during direct and sustained criticism of Gardner. “And the last play the French tacklers didn’t roll away and they jackalled the ball. That would have been a penalty in front of the posts from 30 metres.”

And it would have guaranteed a victory that escaped Argentina when Emiliano Boffelli’s 79th minute long-range strike faded left of the post.

“I’m not forgetting what we didn’t do in the first half but these are clear game -changing decisions.”

Ledesma was also disgusted with Gardner missing an offside on Louis Picamoles, as this veteran French number eight now operates as an impact player (this he certainly achieved when sparking a dust up after the full-time whistle).

“I think that everybody saw it,” said Ledesma.

Everyone also saw the first half when the Pumas were torn apart everywhere but the scrum (take a bow Saracens tighthead Juan Figallo).

Their second-half revival came from France’s inability to defend the maul – honed in Super Rugby by the Jaguares as Guido Petti and Julian Montoya were heaved over – and the inspirational goal kicking of Castres outhalf Benjamin Urdapilleta, who replaced the off colour Nicolás Sánchez.

Argentina will hurt England, so should France, but neither displayed the structural competency to top Pool C. So what. Both remain rugby’s entertainers extraordinaire and both could easily march a long road to the final.