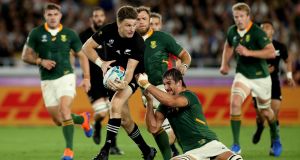 The significance of Ireland’s victory over Scotland on Sunday was heightened by the extraordinary spectacle the day before in the same venue. While the knock-out stages are a different animal, on this form these All Blacks should come with a government health warming – they are to be avoided at all costs for as long as possible.

They came into this heavyweight Pool B opener with just five of the starting XV which drew against South Africa in Wellington just two months ago. In stark contrast to the last World Cup they had relatively new combinations throughout their team.

This was only the fourth time they had put Richie Mo’unga and Beauden Barrett together as dual playmakers from the start, having first resorted to it in that Wellington draw. The All Blacks think-tank persisted with it despite the 47-26 hammering in Perth a fortnight later, which was also the day they decided to accommodate Ardie Savea as well as Sam Cane as dual opensides.

The wingers, George Bridge and Sevu Reece, had only started five Tests between them before this game, and having come together only for the Eden Park revenge mission a week after Perth, this was only the second outing en bloc for this back three.

They haven’t re-invented themselves, for this was vintage All Blacks. Yet, in recasting themselves on the eve of the World Cup, they appear to have rewritten the rules. Of course, with their talent pool, most likely only they could.

So it was that the settled and confident Springboks, with the returning captain Siya Kolisi their only change from Wellington, threw the proverbial kitchen sink at the All Blacks in what seemed like an ominous opening quarter, with their power players dominating the collisions on both sides of the ball.

Yet the All Blacks defended and scrambled, limiting the Springboks to a 3-0 lead which Handre Pollard earned with a monster penalty, but ought to have doubled when hitting the post. And if any team can roll with the punches and then spring into life off the ropes it is the All Blacks, and if any team can score a rapid-fire salvo of 17 points in five minutes, it is also them.

There’s also no cleverer team on the planet, and it was always likely they’d learn from that Wellington draw, and specifically how to outflank that Boks’ blitz defence. They did this by the simple expedient of having Sevu Reece, especially, and Bridge hugging the touchline and were never afraid to throw a huge skip pass in their direction.

Mo’unga having levelled, he had the presence of mind to cross-kick deep in his own territory. The jet-heeled Reece accelerated away, with Aaron Smith the link for Savea to plough on. From the recycle, Barrett eyed up Frans Malherbe and Eben Etzebeth, freeing his hands to put Bridge over.

When Dane Coles flipped a basketball-style pass to Anton Lienert-Brown, he sidestepped infield beyond the flailing Malherbe, Peter-Steph du Toit and Etzebeth, to put the supporting Barrett over. With 44 per cent possession, and 41 per cent territory, they turned around 17-3 up. Classic All Blacks.

Both tries originated from the All Blacks’ growing ascendancy in the air. Smith was an integral part of that first try, with Pollard unable to deal with his box kick and after providing the key link he was then first to effect the quick clear-out from Savea’s carry.

“It was great to get the box-kick right and then, spilled ball, that’s just rugby. Fun rugby,” said Smith. “Let the ball fly and everyone was communicating. I thought Sevu was just going to do his magic there. I was waving my little hand and he threw it at me.”

While Damien MacKenzie’s cruel injury was the unfortunate catalyst for the Mo’unga-Barrett double act, if anything Mo’unga is a better playmaker, if not as electric as MacKenzie. That was shown in the first try, and Barrett’s looser role at fullback affords even more room to attack space. He had more carries, 17, than any other player, and used them to telling effect.

“Aw mate, he is an outstanding player and on his day he is the best player in the world,” ventured Smith. “We saw that tonight. I could hear him and I was just trying to give him the ball every time he wanted it. Having him and Richie out there really helps. And him and Beauden want the ball; you give them the ball and watch out.”

“Sometimes it can be hard making sure I hit the right guy so I’ve got to have a look myself but it’s just trusting the plan. When you have two playmakers it is about them calling the right stuff too. It all helps, communication is a big key in rugby and I always hate when it goes silent. There were times there when South Africa dominated the rucks and it was on us to slow it down, kick it to them and try to put the pressure back on them.”

All that said and done, South Africa’s comeback in the second half underlined how formidable opponents they will potentially be for Ireland in the quarter-finals, as well as giving hope to everyone else.

They fought fire with fire in a wild, frenzied game of extraordinary high skills given the rapid fire tempo. New Zealand made a dozen line breaks to seven, and beat 35 defenders while South Africa did so 28 times. Cheslin Kolbe, as quick-footed and quick-witted as any All Black, accounted for 11, and Barrett seven. The pair of them were as slippery as eels.

This was a blow for the Boks, but not on the scale of losing to Japan four years ago, and they recovered from that to push New Zealand to a nail-biting semi-final.

“We were 17-3 down against the All Blacks at half-time and fought back to within four; we just couldn’t get that last push,” said Rassie Erasmus. “We’ve been here in the past and we know what we’ve got to do. There’s no panic stations. We’re very calm. We’ve still got the confidence in the group and the coaching staff, so we’ll get back Monday, work as hard as we can and there’s a long way to go.”