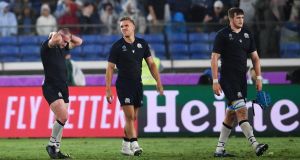 Active first half but a lot of it defending and going backwards. Did well when Conway kicked and chased but rarely allowed to bring his creative flourish into the match. Rating: 7

Didn’t figure at all in the first half when Ireland basically won the match. Very dangerous with ball in hand but no sign of that except for one of two darts. Rating: 5

Didn’t figure in the first 40 minutes and lacked incision. Fumbled in the heavy rain early second half. Easily patrolled out of the match by Ringrose. Rating: 5

No offensive threat to Ireland in the way Aki and then Farrell posed for Ireland. Even with Ireland a man down at the end of the game there was no centre spark. Rating: 5

Got ball in hand a number of times and in space but didn’t threaten Ireland at all, his best effort a strike up the middle early in the second half which came to nothing. Rating: 5

Worked hard to try to get Scotland moving and offered little kicks over for Hogg to run on to. But it was largely ineffective from one of the team’s creative minds. Rating: 5

First half got little ball to work with. Better possession in the second half allowed him create some tempo. But nothing at all sparked for him or Scotland. Rating: 4

Spent most of the time making defensive tackles. The Scotland scrum was solid until the second half when Ireland demolished. Tough day in tough conditions. Rating: 5

First throw to the Scotland lineout was long. Missed tackle on Henderson leading to first Irish try and while he was busy the captain couldn’t lift his team. Rating: 5

Couldn’t stop Best for Ireland’s second try and was out muscled by Cian Healy in a late first half scrum leading to a penalty just before the half time gong. Tackled well. Rating: 6

Was flatfooted when Henderson broke forward for Ireland’s first try and slipped off Conway in the second half. Fell off a few. A difficult day for the Scotland lock. Rating: 4

Could have been more aggressive in defence but allowed James Ryan to bore under him for the first Irish try. Wasn’t allowed to play his usual athletic game. Rating: 5

Dropped the slippery ball just as Scotland inched towards the whitewash in the second half. Struggled to make impact. Not a killer B today.Rating: 5

Didn’t have the influence that Scotland expected for the first 36 minutes before departing the match and maybe the competition with a twisted knee. Rating: 5

Not visible when he needed to be in the first half when CJ Stander was taking big carries and making threats. Lost a few balls in carries too. Rating: 4

Townsend emptied the bench but to no avail. It was particularly striking in the second half when Ireland were down a man after Tadhg Beirne was binned and still they couldn’t budge the scoreboard. Rating: 4

Low marks for that first half where they lost the match. Scotland we not prepared for the Irish fire and physicality and that should have been anticipated. His creative players were stymied and his big men out muscled. Rating: 4

3 The players all know who the cheats are