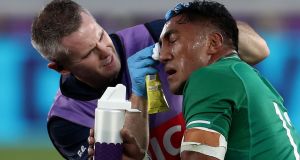 Bundee Aki receives medical attention during the Pool A match at the International Stadium in Yokohama. Photograph: Behrouz Mehri/AFP/Getty Images

Joe Schmidt has admitted Ireland’s six-day turnaround to face hosts Japan at the World Cup is a “frustration” that leaves head injury doubts Peter O’Mahony and Bundee Aki struggling to be available for selection.

Head coach Schmidt revealed neither Ireland star was showing any concussion symptoms after their opening Pool A encounter – but was left to lament the coupling of a six-day return-to-play process with the same length of time to his side’s next match.

Johnny Sexton, Josh van der Flier and Tadhg Furlong were all brought off early but Schmidt said none had sustained injuries, leaving the concerns over O’Mahony and Aki to rankle with Ireland’s head coach.

“Tadhg is fine, Johnny is fine we just decided to bring him off and Conor [Murray] off,” said Schmidt.

“We had two HIAs, in Bundee and Pete. They are both symptom-free at the moment, that’s reassuring, but we’ve got to go through the process.

“They failed HIA one, so they’ve got to go through HIA two and three to determine whether or not they have a concussion.

“Beyond that, the minimum time you can turn around a player is six days. So we’ll look at how that pans out over the next probably 48 hours when they do their HIA two and HIA three.”

Asked if the short gap between Ireland’s opening two World Cup matches could now become problematic, Schmidt continued: “It’s a frustration for everyone, because everyone knows they are going to have some tight turnarounds.

“I know for the Russians they are back out on Tuesday [after playing Japan on Friday night], so that is a real difficulty for them.

“I thought they were incredibly good on Friday evening, the way they threw themselves into the game, and a couple of their players really impressed.

“So for us we’ve just got to accept it’s a six-day turnaround and manage our squad as best we can.”

James Ryan, Rory Best, Furlong and Andrew Conway all crossed in Yokohama as Ireland made good on all their pre-tournament pledges to hit form at the perfect time.

Ireland made a mockery of their record 57-15 loss to England at Twickenham just last month by tearing through sorry Scotland, who were left to lick their wounds and staring down a tough battle to reach the quarter-finals.

In the wake of victory, Schmidt was able to point to the positives of Kearney, Earls and playmaker Joey Carbery all inching back to match fitness.

“It was great what happened this week [with injuries] to a degree, because Rob Kearney, Keith Earls, Joey Carbery; they’re all training really well,” said Schmidt.

“So we’ve got them hopefully on an upswing for Japan. But you never take anything for granted, we’ll only get two trainings – Tuesday and Thursday – because we travel tomorrow.”