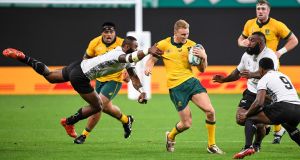 Reece Hodge of Australia has been cited after a no-arms tackle during the win over Fiji. Photo: William West/Getty Images

Australia wing Reece Hodge has been cited for alleged foul play during Saturday’s World Cup clash against Fiji in Sapporo.

Hodge escaped sanction after he prevented Peceli Yato from scoring a certain try in the 25th minute of the Wallabies’ 39-21 victory by halting the flanker with a shoulder-led, no-arms challenge to the head.

Fiji captain Dominiko Waqaniburotu revealed after the Pool D showdown at the Sapporo Dome that, having requested referee Ben O’Keeffe to refer the incident to television match official Rowan Kitt, the tackle was deemed legitimate.

Yato then failed a head injury assessment after being hurt in a tackle that could also have been punished by a penalty try.

In a statement, tournament organisers said: “Australia winger Reece Hodge has been cited by John Montgomery (Scotland) for an act of foul play contrary to Law 9.13 (dangerous tackle) in the 25th minute of Australia’s Rugby World Cup 2019 Pool D match against Fiji.

“The hearing will take place in Tokyo, with the date and time to be confirmed shortly.”

Australia continue their World Cup campaign by facing Wales in Tokyo next Sunday.

Leinster sign Crusaders tighthead prop Michael Alaalatoa 20:00
GAA to take keen interest in Leinster trial to get spectators back at the RDS 19:48
Thomas Tuchel tells Chelsea to focus on the present and seal progress against Porto 19:34
Rachael Blackmore admits to sleepless night as she relived Aintree heroics 18:37
Matsuyama’s crowning glory at Augusta always seemed his destiny 18:30
Crossword Get access to over 6,000 interactive crosswords