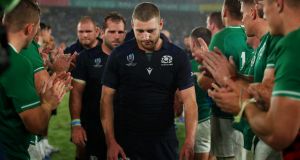 Scotland boss Gregor Townsend was left scratching his head over his side’s lack of energy and aggression during their 27-3 loss to Ireland in their World Cup opener in Yokohama on Sunday.

Scotland were poor throughout but particularly in the early stages, conceding three tries in the first 25 minutes as they failed to impose their gameplan on the world’s top-ranked side.

“There is disappointment obviously when you are part of a squad that is building up for the first game and you don’t play your best,” said Townsend, who won 82 caps for Scotland as a player.

“The players are very disappointed and we didn’t play as the best version of ourselves tonight.

“I have seen it in training and in games, but if you don’t do that against the best teams they will punish you.

“This World Cup has only just started and we will need to play much better in the next three games to get out of this group. I believe in this squad and think they will be much better against Samoa in eight days’ time.”

Townsend said he and his whole squad would be looking for answers in the wake of Sunday’s insipid display.

“We are asking each other . . . The energy was there but it was not high enough to beat a team like Ireland.

“I don’t know if it is because players hadn’t played for two, three weeks – we had trained well but we just missed the start of that game, which is very disappointing.”

Scotland face Samoa in Kobe on September 30th before their remaining Pool A matches against Russia and hosts Japan.

They will need to win all three matches to qualify for the quarter-finals, something they have done at every World Cup bar one.

“Our game can put pressure on the opposition when we are on it,” insisted Townsend. “It involves running the ball, kicking and defence . . . all those aspects have to be better to progress into the quarter-finals and I believe they will be.”

McIlroy well off pace as Thomas leads low-scoring Zozo 10:24
Seán O’Brien: Anger over my parents’ break-up has never left me 09:30
Touching response to Marcus Rashford’s clarion call reveals very best of England 07:00
Michael Walker: Is De Gea an answer again amid the questions at United? 06:00
Greville and Westmeath relishing life in the top tier 06:00
Crossword Get access to over 6,000 interactive crosswords