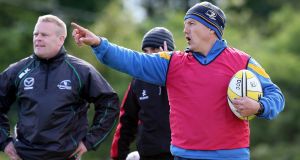 “Last spring Academy Director Johan Taylor supervised the laying of a new rugby pitch with the most expensive turf and grass seed available; good job too otherwise last summer’s drought would have wreaked havoc. Instead it is lush, smooth and ready to go for the new season.”

The paragraph could be lifted straight from the pages of Ross O’Carroll-Kelly’s latest novel but, seemingly, a market exists in Ireland for “Europe’s only bespoke private rugby academy.”

The cost for an aspiring professional, or just a future club coach in the mould of the golf club pro, to undertake this nine-month “residential” course is €16,900.

This is before the Rugby Academy Ireland (no affiliation to the IRFU) caters for the player’s educational needs. That will cost extra.

The target client appears to be reasonably talented 19- and 20-year-olds who did not make underage representative teams or a provincial academy, yet they still hold aspirations of carving out a career.

The fee provides access to professional coaching and four-star accommodation with the business model apparently transferred from South Africa.

In fact, two South Africans, Taylor, along with Dan van Zyl (a long serving coach inside the Leinster youths system), are running the academy out of Killashee hotel, just off the M7 on the outskirts of Naas.

“The first coaching team my son worked with, that I was not involved in, was the Leinster Youths under-18 squad of 2012,” said Joe Carbery (father of Joey Carbery) on the website’s testimonial page. “Dan Van Zyl was the head coach. At the time I remember thinking, and even more so looking back now, how fortunate it was for Joey that he had Dan as a coach through this very transitional phase of his rugby career. As a father, I could not have asked for a better man to be coaching my son at this time.”

Such praise, alongside support from Tadhg Furlong and Fiona Coghlan, lends legitimacy to the academy as it enters a second year.

The €16,900 (€14,850 for non residents) not only buys access to “lush and smooth” facilities but coaching from recently retired Ireland winger Ali Miller while Bernard Jackman, Johne Murphy and Mike Ross are also involved.

There’s even an unofficial link to Naas RFC.

So, seemingly, this is a sign of burgeoning rugby times with the golf pro analogy supposedly used as the hook.

“It is common for Irish golf pros who do not make the top ranks to make great pro careers around the world playing or coaching,” reads a press release. “Now, Taylor and Dan Van Zyl are bringing that model to Irish rugby.”

The “golf pro” market is enormous, but the fact this academy can wash its face after year one may indicate job prospects in rugby are growing faster than many might believe.

There were six full-time students in 2019 as well as visiting groups from Dundalk and Chile.

The word “bespoke” – depending on your bank account – will either entice parents or keep them firmly on the M7.