Van der Flier to start ahead of O’Brien against England 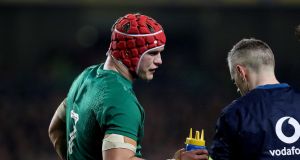 Ireland’s Josh van der Flier is expected to be named at openside for the Six Nations opener against England. Photograph: Billy Stickland/Inpho

Josh van der Flier is set to start against England on Saturday at the Aviva stadium despite Seàn O’Brien’s return to fitness.

Van der Flier is the incumbent Ireland openside, having excelled against New Zealand in November when Dan Leavy was a late withdrawal with a neck problem and O’Brien was recovering from arm surgery, but he hasn’t featured in the Six Nations since damaging knee ligaments in Paris on this weekend last year.

The other notable selection, when Joe Schmidt announces his squad Thursday lunchtime, should see Robbie Henshaw at fullback for Ireland for the first time since his debut in June 2013 against the US Eagles.

It remains unclear if Henshaw’s shift from centre is part of a longer term World Cup plan Schmidt’s or down to Rob Kearney’s lack of fitness. The 32-year-old missed last week’s warm weather training in Portugal to play for Leinster against Scarlets alongside Jack McGrath.

Bundee Aki and Garry Ringrose are expected to continue the Grand Slam midfield from Twickenham last March while Johnny Sexton and Conor Murray also resume their partnership at halfback (Murray missed November with a neck issue).

1 Trump endorsement by Jack Nicklaus leads to avalanche of dismay
2 France 35 Ireland 27: Ireland player ratings
3 Ireland fall short against France as England win Six Nations title
4 Stockdale’s blunder and French flair: Where Ireland came undone in Paris
5 World Handicap System: What is it? How does it work? Will my handicap change?
Real news has value SUBSCRIBE